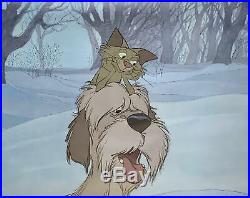 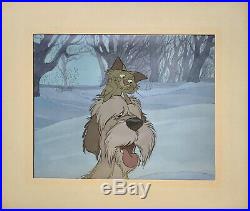 COLONEL AND SERGEANT TIBBS PRODUCTION CEL WALT DISNEY STUDIOS GOUACHE ON CEL, 1961. Original hand painted production animation cel of Colonel and Sergeant Tibbs from "One Hundred and One Dalmatians, " 1961, Walt Disney Studios; Set on a lithographic background; With original Art Corner Certificate sticker verso; Single matted. "One Hundred and One Dalmatians" ("101 Dalmatians"), is a 1961 full length animated feature film by Walt Disney Productions. It was adapted from Dodie Smith's 1956 novel of the same name. It stars Rod Taylor as the voice of Pongo and Cate Bauer as the voice of Perdita; with Betty Lou Gerson as the voice of the evil and villainous Cruella de Vil.

The animation of all the characters from the film was quite extraordinary. The film "Sleeping Beauty, " 1959 was very expensive to make and it took a huge financial loss at the box-office; as a result, the Disney animation studio was considering closing. During the production of "Sleeping Beauty, " Walt Disney told animator Eric Larson: I don't think we can continue, it's too expensive.

Because Disney's entire company was based on animation, he was looking for a way to continue with animation, and at the same time significantly reduce costs. The animator Ub Iwerks had been experimenting with Xerox photography to aid in animation process.

By 1959 he had modified a Xerox camera to transfer the drawings by the animators, directly onto animation cels. However, the limitation was that the camera was unable to deviate from a black scratchy outline, and the resulting cels lacked the fine lavish quality of hand inking. One of the enormous benefits of the Xerox was that it was a tremendous help towards animating the spotted dalmatian dogs. According to famed animator Chuck Jones, Disney was able to complete the film for about half of what it would have cost if they had had to animate all the dogs and spots.

To achieve the spotted dalmatians, the Disney animators envision the spot pattern as a star constellation. Once they had an "anchor spot, " the next spot was placed into the pattern, and so on until the fully spotted dalmatian was achieved. All totaled, the film featured 6,469,952 spots, with Pongo having 72 spots, Perdita 68, and each puppy 32. Sergeant Tibbs is a tabby cat and sidekick of the Colonel, an old English Sheepdog.

Tibbs was primarily responsible for leading the one hundred and one dalmatian puppies out of Cruella's dilapidated family mansion, Hell Hall. Sergeant Tibbs was voiced by David Frankham, The Colonel was voiced by Disney voice artist J. Pat O'Malley, and he was animated by John Lounsbery. From Walt Disney animator Andreas Deja. Most of the animation for this character (The Colonel) was done by John Lounsbery, who must have been relieved to have gotten this assignment.

After animating mostly serious and dramatic scenes for the previous film epic "Sleeping Beauty, " he again was given the opportunity to handle comic animation. When you look at Lounsbery's career, it's his eccentric characters who are the most memorable. The alligators in "Dance of the Hours, " some of the mice in "Cinderella, " the crocodile in "Peter Pan, " and Tony and Joe in "Lady and the Tramp" are just a few highlights.

Over the years John didn't get to develop his "own" characters very often in the way Frank & Ollie or Milt did. But the Colonel is one of his animated creations. This is a perfect image of two heroes of the film, the Colonel and Sergeant Tibbs.

The Colonel has his mouth open with tongue hanging out and you can even see that his right eye is open (which is rare for him, as he is Sheepdog). Sergeant Tibbs is sitting on the Colonel's head, eyes open, and has a big smile. A beautiful happy original production cel of the pair, and a great addition to any animation art collection! Measurements: Size - Colonel and Sergeant Tibbs: 6 3/4 x 4", Image 8 x 10"; Mat 12 x 14.

Condition: See pictures of the actual cel, which is in excellent overall condition as shown above! All items we sell are from a smoke-free/mold-free home/workplace and are in excellent condition unless otherwise noted.

I own every work pictured for sale and I stand behind every item. Please follow/bookmark me as a favorite and keep checking back for more items for sale in the coming weeks. For now, please check out my other Drawings and Cels and other original modern and contemporary artwork for sale! The item "1961 DISNEY 101 DALMATIANS COLONEL TIBBS DOG ORIGINAL PRODUCTION ANIMATION CEL" is in sale since Monday, October 14, 2019. This item is in the category "Collectibles\Animation Art & Characters\Animation Art\Production Art".