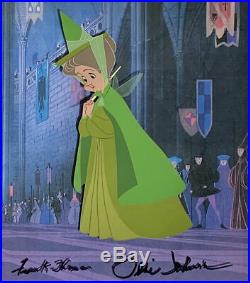 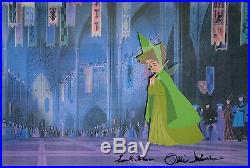 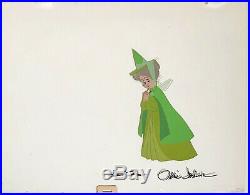 FAUNA PRODUCTION CEL WALT DISNEY STUDIOS GOUACHE ON CEL, 1959. Original hand painted and hand inked production animation cel of Fauna set on a lithographic background from "Sleeping Beauty, " 1959, Walt Disney Studios; Numbered 20 in ink lower right; Signed by Frank Thomas and Ollie Johnston in ink lower center; Unframed. "Sleeping Beauty" is a Walt Disney animated full length feature film and was based on "The Sleeping Beauty" by Charles Perrault and "Little Briar Rose" by The Brothers Grimm. The film was the sixteenth in the Walt Disney Animated Classics series, and it was released to theaters on January 29, 1959 by Buena Vista Distribution. This was to be the last Disney adaptation of a fairy tale for many years, both because of its initial mixed critical reception, and because of it's under performance at the box office. The Walt Disney studio did not return to the fairy tale genre until 30 years later, with the release of "The Little Mermaid" in 1989. "Sleeping Beauty" was directed by Les Clark, Eric Larson, and Wolfgang Reitherman, under the supervision of Clyde Geronimi. The story was written by Joe Rinaldi, Winston Hibler, Bill Peet, Ted Sears, Ralph Wright, and Milt Banta. The film's musical score and songs, featuring the Graunke Symphony Orchestra, was under the direction of George Bruns. Arrangements and/or adaptations were derived from numbers from the 1890 "Sleeping Beauty Ballet" by Pyotr Ilyich Tchaikovsky. In addition, Igor Stravinsky's music compositions were also adapted into the film.

"Sleeping Beauty" was the first animated film to be photographed in the Super Technirama 70 widescreen process, as well as the second full-length animated feature film to be filmed in anamorphic widescreen; following "Lady and the Tramp" four years earlier. In select first-run engagements, the film was presented in Super Technirama 70 and 6-channel stereophonic sound. Flora, Fauna and Merryweather are Princess Aurora's Fairy Godmothers, who appear at baby Aurora's christening to present their gifts to her, as well as go on to become her guardians.

" Barbara Luddy had previously voiced Lady in "Lady and the Tramp. " The principle animator for the Three Fairies was Ollie Johnston and a little known fact is that one of the actresses who was one of the live action models for the Good Fairies was Frances Bavier, the future Aunt Bee on "The Andy Griffith Show. Measurements: Size - Fauna: 7 x 4 1/2", Image 10 3/4 x 15 1/2". Condition: See pictures of the actual cel, which is in excellent overall condition despite minor paint loss to the rim of the hat as shown above! All items we sell are from a smoke-free/mold-free home/workplace and are in excellent condition, unless otherwise noted. I own every work pictured for sale and I stand behind every item. Please follow/bookmark me as a favorite and keep and keep checking back for more items for sale in the coming weeks. For now, please check out my other Animation Drawings and Cels and other original modern and contemporary artwork for sale! The item "1959 WALT DISNEY SLEEPING BEAUTY FAUNA SIGNED ORIGINAL PRODUCTION ANIMATION CEL" is in sale since Tuesday, July 9, 2019. This item is in the category "Collectibles\Animation Art & Characters\Animation Art\Production Art". The seller is "shadowline" and is located in Durham, North Carolina. This item can be shipped worldwide.