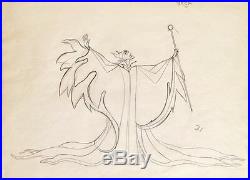 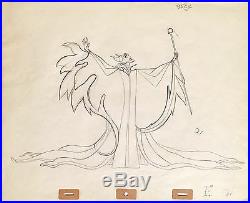 MALEFICENT PRODUCTION DRAWING WALT DISNEY STUDIOS GRAPHITE ON PEG HOLE PAPER, 1959. Original production animation drawing of Maleficent in graphite pencil from "Sleeping Beauty, " 1959, Walt Disney Studios; Numbered 21 lower center right and lower right; Animation ladder lower right; Unframed. "Sleeping Beauty" is a Walt Disney animated full length feature film and was based on "The Sleeping Beauty" by Charles Perrault and "Little Briar Rose" by The Brothers Grimm. The film was the sixteenth in the Walt Disney Animated Classics series, and it was released to theaters on January 29, 1959 by Buena Vista Distribution. This was to be the last Disney adaptation of a fairy tale for many years, both because of its initial mixed critical reception, and because of it's under performance at the box office. The Walt Disney studio did not return to the fairy tale genre until 30 years later, with the release of "The Little Mermaid" in 1989.

The film's musical score and songs, featuring the Graunke Symphony Orchestra, was under the direction of George Bruns. Arrangements and/or adaptations were derived from numbers from the 1890 "Sleeping Beauty Ballet" by Pyotr Ilyich Tchaikovsky.

In addition, Igor Stravinsky's music compositions were also adapted into the film. "Sleeping Beauty" was the first animated film to be photographed in the Super Technirama 70 widescreen process, as well as the second full-length animated feature film to be filmed in anamorphic widescreen; following "Lady and the Tramp" four years earlier. In select first-run engagements, the film was presented in Super Technirama 70 and 6-channel stereophonic sound. The style for "Sleeping Beauty" was based on the art of Eyvind Earle, who was known for his'Pre-Renaissance' style; accomplished with strong vertical lines combined with Gothic elegance. Earle was involved with the design of all the characters in the film, and he designed and painted most of the backgrounds.

It is known that Frank Thomas who animated Lady Tremaine and Marc Davis who animated Maleficent, incorporated the facials features of Eleanor into both characters. Audley was also the live-action model for Maleficent, and Marc Davis claimed that her movements and expressions were ultimately incorporated into the animation. Marc Davis's design for Maleficent's costume was inspired by a book on Medieval art. One of the images featured was that of a religious figure with long robes, the ends of which resembled flames. Davis incorporated this into Maleficent's final design, and he based the sides of her headdress on the wings of a bat, and the top of her headdress on the horns of a devil.

If you ask people to name their favorite Disney Villain, chances are you will one of three answers; The Evil Queen/Witch from "Snow White and the Seven Dwarfs, " Cruella DeVil from "One hundred and One Dalmatians, " or Maleficent from Sleeping Beauty. Two of the three, Cruella and Maleficent, were created and drawn by the great Walt Disney animator Marc Davis. This is a very rare, original production animation drawing of Maleficent in graphite pencil. She is full figure and holding her staff. The drawing was used for the iconic scene in the film when, after casting her curse on Princess Aurora, she holds up her arms and vanishes into yellow green flames.

The dialog from the scene is below: Maleficent speaking to the crowd in King Stefan's Castle: Stand back, you fools! This is an absolutely beautiful drawing of Maleficent, the Mistress of all evil; and would make a great addition to any animation collection. Measurements: Size - Maleficent 9 x 14 1/2", Sheet 12 1/2 x 15 1/2". Condition: See pictures of the actual drawing, which is in excellent overall condition as shown above!