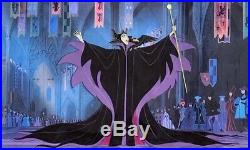 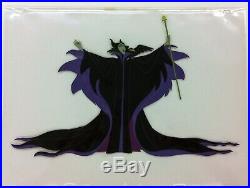 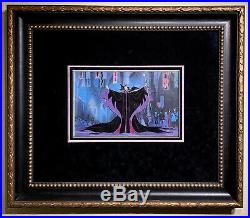 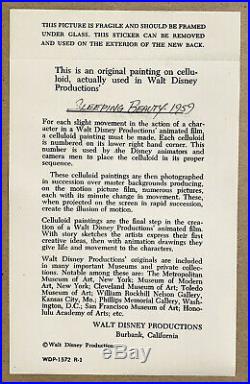 MALEFICENT & DIABLO PRODUCTION CEL WALT DISNEY STUDIOS GOUACHE ON CEL, 1959. Original hand painted and hand inked production animation cel of Maleficent and Diablo set on a lithographic matching background from "Sleeping Beauty, " 1959, Walt Disney Studios; With Walt Disney certificate; Framed with a black and gold wood frame, three suede acid free mats, and UV conservation clear Museum Perfect glass. Listen well, all of you! "Sleeping Beauty" is a Walt Disney animated full length feature film and was based on "The Sleeping Beauty" by Charles Perrault and "Little Briar Rose" by The Brothers Grimm. The film was the sixteenth in the Walt Disney Animated Classics series, and it was released to theaters on January 29, 1959 by Buena Vista Distribution. This was to be the last Disney adaptation of a fairy tale for many years, both because of its initial mixed critical reception, and because of it's under performance at the box office. The Walt Disney studio did not return to the fairy tale genre until 30 years later, with the release of "The Little Mermaid" in 1989. "Sleeping Beauty" was directed by Les Clark, Eric Larson, and Wolfgang Reitherman, under the supervision of Clyde Geronimi. The story was written by Joe Rinaldi, Winston Hibler, Bill Peet, Ted Sears, Ralph Wright, and Milt Banta. The film's musical score and songs, featuring the Graunke Symphony Orchestra, was under the direction of George Bruns.

The style for "Sleeping Beauty" was based on the art of Eyvind Earle, who was known for his'Pre-Renaissance' style; accomplished with strong vertical lines combined with Gothic elegance. Earle was involved with the design of all the characters in the film, and he designed and painted most of the backgrounds. The early sketches for Maleficent depicted a hag-like witch, however it was later decided that her final design should be more elegant; as it better suited Earle's backgrounds. The principal animator for Maleficent, Marc Davis, decided to make Maleficent a powerful fairy rather than an old crone that had been described in the original source material.

A contributing factor for this decision may have been influenced by the choice of Eleanor Audley to be the voice of the character. Audley had previously worked for Disney by providing the voice for the cold and calculating Lady Tremaine (The Stepmother) in Cinderella.

It is known that Frank Thomas who animated Lady Tremaine and Marc Davis who animated Maleficent, incorporated the facials features of Eleanor into both characters. Audley was also the live-action model for Maleficent, and Marc Davis claimed that her movements and expressions were ultimately incorporated into the animation. Marc Davis's design for Maleficent's costume was inspired by a book on Medieval art. One of the images featured was that of a religious figure with long robes, the ends of which resembled flames. Davis incorporated this into Maleficent's final design, and he based the sides of her headdress on the wings of a bat, and the top of her headdress on the horns of a devil.

This is a very rare original production animation cel of Maleficent and her raven Diablo. Maleficent is an amazing 14 1/2 inches long, eyes and mouth open, completely full figure with all of her robes visible, holding her staff, and her pet raven is perched on her shoulder with his wings spread. The cel was used for the iconic scene in the film, just before she casts a curse on Princess Aurora, when she holds up her arms and says to all the members of the Kingdom gathered in King Stefan's Castle Hall, Listen well, all of you!

Condition: See pictures of the actual cel, which is in excellent overall condition, as shown by the pictures above! All items we sell are from a smoke-free/mold-free home/workplace and are in excellent condition, unless otherwise noted. I own every work pictured for sale and I stand behind every item. Please follow/bookmark me as a favorite and keep and keep checking back for more items for sale in the coming weeks. For now, please check out my other Animation Drawings and Cels and other original modern and contemporary artwork for sale!

The item "1959 RARE WALT DISNEY SLEEPING BEAUTY MALEFICENT DIABLO ORIGINAL PRODUCTION CEL" is in sale since Thursday, February 28, 2019. This item is in the category "Collectibles\Animation Art & Characters\Animation Art\Production Art". The seller is "shadowline" and is located in Durham, North Carolina. This item can be shipped worldwide.