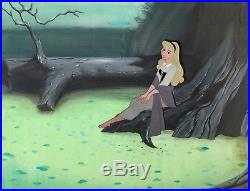 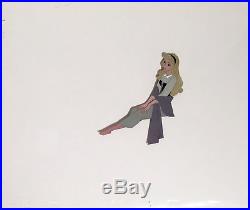 BRIAR ROSE PRODUCTION CEL WALT DISNEY STUDIOS GOUACHE ON CEL, 1959. Original hand painted and hand inked production animation cel of Briar Rose from "Sleeping Beauty, " 1959, Walt Disney Studios; Set on a hand painted custom background; Unframed. "Sleeping Beauty, " 1959 is an animated musical film produced by Walt Disney based on two stories: "The Sleeping Beauty" by Charles Perrault and "Little Briar Rose" by The Brothers Grimm. The film was released to theaters on January 29, 1959, by Buena Vista Distribution. This was the last Disney adaptation of a fairy tale for 30 years because of its initial mixed critical reception and because of under performance at the box office.

The next Disney adaption of a fairy tale would not occur until 1989 with The Little Mermaid. The film introduced two characters that would become universal favorites; Maleficent and Princess Aurora. Aurora, along with Snow White and Cinderella would be forever immortalized in the public's view as the three greatest Disney Princesses. The original design for Aurora and her peasant disguise Briar Rose was developed by Tom Oreb, who based the character on the famed Hollywood actress Audrey Hepburn; known for her thin frame and a very graceful demeanor.

Marc Davis, the head animator, would continue the development process by morphing her general appearance and the clothing of the heroine. The fine tuning of the character continued so that she could be combined with the very angular forms present in the Eyvind Earle hand painted backgrounds. "Sleeping Beauty" was directed by Les Clark, Eric Larson, and Wolfgang Reitherman; under the supervision of Clyde Geronimi. Additional story work was by Joe Rinaldi, Winston Hibler, Bill Peet, Ted Sears, Ralph Wright, and Milt Banta. The film's musical score and songs, featuring the work of the Graunke Symphony Orchestra under the direction of George Bruns, are arrangements or adaptations of numbers from the 1890 "Sleeping Beauty Ballet" by Pyotr Ilyich Tchaikovsky.

"Sleeping Beauty" was the first animated film to be photographed in the Super Technirama 70 widescreen process, as well as the second full-length animated feature film to be filmed in anamorphic widescreen (following "Lady and the Tramp" four years earlier). The film was presented in Super Technirama 70 and 6-channel stereophonic sound in first-run engagements. As with other Disney films, an actress was hired as a live-action model (as a guide for the animators) for Princess Aurora/Briar Rose. Helene Stanley, who was also the model for Cinderella in 1950, became the model for the heroine. It is interesting to note that prior to marrying Marc Davis in 1956, Alice (Davis) designed some of costumes worn by Stanley in her acting role in Sleeping Beauty.

In 1952, the professional opera singer Mary Costa, after meeting people at a party with her future husband director Frank Tashlin, auditioned for the part of Disney's Princess Aurora/Briar Rose. Walt Disney called her personally within hours of the audition to inform her that the part was hers. The success of the film "Sleeping Beauty, " owes a chuck of those accolades to the voice of Mary Costa. Her songs were some of the most beautiful ever sung by a Disney Princess. In November 1999 Mary Costa received the Disney Legends Award, and her hand prints are now a permanent part of the Disney Legends Plaza at the entrance to Walt Disney Studios. After Maleficent's evil curse that Princess Aurora would (before the sun sets on her sixteenth birthday) prick her finger on the spindle of a spinning wheel and die; the three Good Fairies disguise Aurora as a peasant named Briar Rose and hide her deep in a remote forest cottage.

The majority of the movie focuses on Briar Rose, and this is a beautiful original production animation cel of her. She had been placed on a hand painted custom background of the forest, just outside beyond her cottage home.

A beautiful image of her sitting on the roots of a large tree, and a great addition to any vintage Walt Disney animation art collection! Measurements: Size - Briar Rose: 5 1/2 x 4 3/4", Image 11 x 14 1/2". Condition: See pictures below of the actual cel, which is in excellent overall condition as shown by the pictures below! All items we sell are from a smoke-free/mold-free home/workplace and are in excellent condition, unless otherwise noted.

The item "1959 RARE DISNEY SLEEPING BEAUTY BRIAR ROSE ORIGINAL PRODUCTION ANIMATION CEL" is in sale since Tuesday, July 24, 2018. This item is in the category "Collectibles\Animation Art & Characters\Animation Art\Production Art". The seller is "shadowline" and is located in Durham, North Carolina. This item can be shipped worldwide.