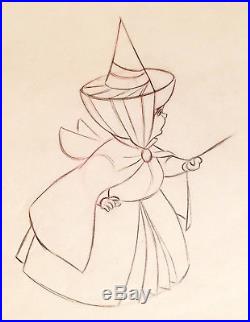 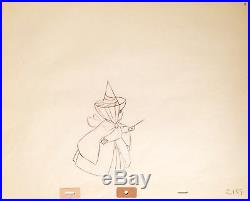 Fauna: Oh, I just love happy endings. "Sleeping Beauty, " 1959 is an animated musical film produced by Walt Disney based on two stories: "The Sleeping Beauty" by Charles Perrault and "Little Briar Rose" by The Brothers Grimm. The film was released to theaters on January 29, 1959, by Buena Vista Distribution. This was the last Disney adaptation of a fairy tale for 30 years because of its initial mixed critical reception and because of under performance at the box office. The next Disney adaption of a fairy tale would not occur until 1989 with The Little Mermaid. "Sleeping Beauty" was directed by Les Clark, Eric Larson, and Wolfgang Reitherman; under the supervision of Clyde Geronimi. Additional story work was by Joe Rinaldi, Winston Hibler, Bill Peet, Ted Sears, Ralph Wright, and Milt Banta. The film's musical score and songs, featuring the work of the Graunke Symphony Orchestra under the direction of George Bruns, are arrangements or adaptations of numbers from the 1890 "Sleeping Beauty Ballet" by Pyotr Ilyich Tchaikovsky.

"Sleeping Beauty" was the first animated film to be photographed in the Super Technirama 70 widescreen process, as well as the second full-length animated feature film to be filmed in anamorphic widescreen (following "Lady and the Tramp" four years earlier). The film was presented in Super Technirama 70 and 6-channel stereophonic sound in first-run engagements. Flora, Fauna and Merryweather are Princess Aurora's Fairy Godmothers, who appear at baby Aurora's christening to present their gifts to her, as well as go on to become her guardians. The Fairies were voiced by Verna Felton (Flora), Barbara Jo Allen (Fauna), and Barbara Luddy (Merryweather). Verna Felton also voiced Queen Leah, Aurora's mother; and had prior roles as Dumbo's mother in "Dumbo, " the Fairy Godmother in "Cinderella, " the Queen of Hearts in "Alice in Wonderland, " and Aunt Sarah in Lady in the Tramp.

Merryweather is the shortest and youngest Fairy, dressed in a blue gown, a blue hat, and a blue cape clipped with a blue circle. She is the Fairy who is the most verbal and aggressive towards Maleficent, and she is much bolder than the other two Fairies.

As Merryweather is about to give her gift, Maleficent makes her appearance and curses Aurora to die when she touches a spinning wheel's spindle before the sun sets on her sixteenth birthday. Merryweather's gift to Aurora is to weaken Maleficent's curse so that instead of death, Aurora will fall into a deep sleep until she is awakened by true love's kiss. This is a wonderful original production drawing of Merryweather from the Walt Disney masterpiece "Sleeping Beauty, " 1959. She is full figure, eyes open, and holding her magic wand. A large and impressive drawing that is perfect for any vintage Walt Disney animation art collection! Measurements: Size - Merryweather: 6 x 4 1/2", Sheet 12 1/2 x 15 1/2". Condition: See pictures below of the actual drawing, which is in excellent overall condition as shown by the pictures below! All items we sell are from a smoke-free/mold-free home/workplace and are in excellent condition, unless otherwise noted. I own every work pictured for sale and I stand behind every item.

Please follow/bookmark me as a favorite and keep and keep checking back for more items for sale in the coming weeks. For now, please check out my other Drawings and Cels and other original modern and contemporary artwork for sale! The item "1959 DISNEY SLEEPING BEAUTY MERRYWEATHER FAIRY ORIGINAL PRODUCTION DRAWING CEL" is in sale since Tuesday, June 26, 2018.