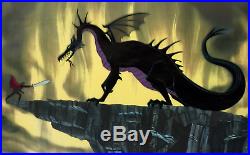 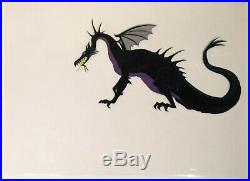 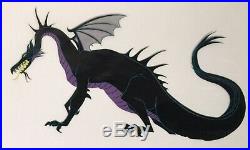 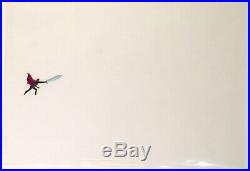 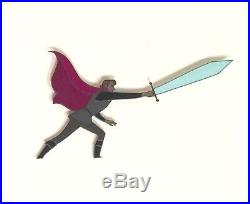 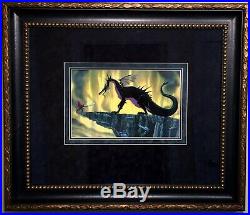 MALEFICENT AS DRAGON AND PRINCE PHILLIP PRODUCTION CELS WALT DISNEY STUDIOS GOUACHE ON CEL, 1959. Original hand painted and hand inked production animation cels of Maleficent as the Dragon and Prince Phillip set on a lithographic background from "Sleeping Beauty, " 1959, Walt Disney Studios; Framed with a black and gold wood frame, three suede acid free mats, and UV conservation clear Museum Perfect glass. Now you shall deal with me, o prince, and all the powers of HELL!

Maleficent before transforming into the Dragon. "Sleeping Beauty" is a Walt Disney animated full length feature film and was based on "The Sleeping Beauty" by Charles Perrault and "Little Briar Rose" by The Brothers Grimm.

The film was the sixteenth in the Walt Disney Animated Classics series, and it was released to theaters on January 29, 1959 by Buena Vista Distribution. This was to be the last Disney adaptation of a fairy tale for many years, both because of its initial mixed critical reception, and because of it's under performance at the box office. The Walt Disney studio did not return to the fairy tale genre until 30 years later, with the release of "The Little Mermaid" in 1989. "Sleeping Beauty" was directed by Les Clark, Eric Larson, and Wolfgang Reitherman, under the supervision of Clyde Geronimi. The story was written by Joe Rinaldi, Winston Hibler, Bill Peet, Ted Sears, Ralph Wright, and Milt Banta. The film's musical score and songs, featuring the Graunke Symphony Orchestra, was under the direction of George Bruns. Arrangements and/or adaptations were derived from numbers from the 1890 "Sleeping Beauty Ballet" by Pyotr Ilyich Tchaikovsky. In addition, Igor Stravinsky's music compositions were also adapted into the film. "Sleeping Beauty" was the first animated film to be photographed in the Super Technirama 70 widescreen process, as well as the second full-length animated feature film to be filmed in anamorphic widescreen; following "Lady and the Tramp" four years earlier. In select first-run engagements, the film was presented in Super Technirama 70 and 6-channel stereophonic sound.

The style for "Sleeping Beauty" was based on the art of Eyvind Earle, who was known for his'Pre-Renaissance' style; accomplished with strong vertical lines combined with Gothic elegance. Earle was involved with the design of all the characters in the film, and he designed and painted most of the backgrounds. The early sketches for Maleficent depicted a hag-like witch, however it was later decided that her final design should be more elegant; as it better suited Earle's backgrounds.

If you ask people to name their favorite Disney Villain, chances are you will one of three answers; The Evil Queen/Witch from "Snow White and the Seven Dwarfs, " Cruella DeVil from "One hundred and One Dalmatians, " or Maleficent from Sleeping Beauty. Two of the three, Cruella and Maleficent, were created and drawn by the great Walt Disney animator Marc Davis. The voice of Maleficent was performed by Eleanor Audley. She had worked for Disney prior by also being the voice for the cold and calculating Lady Tremaine (The Stepmother) in Cinderella.

If is known that Frank Thomas for Lady Tremaine and Marc Davis for Maleficent, incorporated facials features of Eleanor into both characters. Wolfgang Reitherman (known as Woolie) began working for Walt Disney in 1934, and is credited in films from Pinocchio, 1940 (Monstro the Whale) to The Fox and the Hound, 1981 (co-producer).

His masterful animation work includes the climatic dinosaur fight in Igor Stravinsky's The Rite of Spring in Fantasia, the Headless Horseman chase in The Legend of Sleepy Hollow section in The Adventures of Ichabod and Mr. Toad, the Crocodile in Peter Pan, and of course Maleficent as a dragon in Sleeping Beauty. An interesting side note is that all three of Reitherman's sons; Bruce, Richard, and Robert provided voices for Disney characters, Mowgli in The Jungle Book, Christopher Robin in the Winnie the Pooh films, and Wart in The Sword in the Stone.

The climatic ending of Sleeping Beauty is the transformation of The Mistress of all Evil - Maleficent into a massive black and purple Dragon capable of breathing green fire. Children were absolutely terrified of the Dragon, with her large teeth, powerful claws, and expansive wing span. The success of the Dragon is owed to Reitherman's remarkable drawing, draftsman, and animation skills.

Prince Phillip was animated by Milt Kahl and voiced Bill Shirley and Aurora was animated by Marc Davis (who was also lead animator for Maleficent) and voiced by Mary Costa. Both Bill and Mary would be live action models for Prince Phillip and Briar Rose/Princess Aurora for the animators, and their chemistry was magical on screen. In addition, their singing together was one of the many highlights of the film. As discussed by Andreas Deja, Milt Kahl did not like the job of animating Prince Phillip. Some of you might know that Milt absolutely despised working on the prince.

During one of our get togethers I asked him, how he could do such a beautiful job on a character he loathes. To my best recollection he said:'Well, the character needs to be in the picture, I didn't like the assignment, but you do the best you can. The animation of Prince Phillip by Milt Kahl was radically different than prior Princes in other films.

Phillip was an active character; speaking to his horse Sampson and Sampson understanding what he was saying. Phillip was also seen as a child at the start of the film, had to be animated in more than one outfit, was the first Prince to use weapons against a Villain; and had to speak, interact, and sing with his love interest Princess Aurora/Briar Rose. As I mentioned before, Milt Kahl really didn't enjoy animating Prince Phillip. A handsome dude with a limited range for acting just didn't appeal to him.

Of course he still gave it all he'd got to put a descent performance on the screen. (In reference to viewing some of Kahl's rough drawings)... It looks to me that this scene was somewhat based on live action reference, but the translation into drawn animation is incredible. Just dealing with the horse turning direction would be a real challenge.

Assistant artist Dave Suding, who worked on the film, told me once that one clean up drawing with the prince on his horse took one full day. That means a second of final clean up footage would require a whole month! This is one of the finest animation production setups that I have ever seen!

A full figure Prince Phillip holding the Sword of Truth (created by the Good Fairy Fauna) together with a full Figure Maleficent as the Dragon; all on a wonderful lithographic background. The image spans a very large 10" x 16" and the piece would certainly be one of the highlights for any vintage animation collection! Measurements: Size - Maleficent as Dragon 6 1/2" x 11 3/4", Prince Phillip 1 3/4 x 3", Image 10 x 16", Frame 30 x 34 3/4. Condition: See pictures below of the actual cels, which are in excellent overall condition as shown by the pictures above! All items we sell are from a smoke-free/mold-free home/workplace and are in excellent condition, unless otherwise noted.

I own every work pictured for sale and I stand behind every item. Please follow/bookmark me as a favorite and keep and keep checking back for more items for sale in the coming weeks. For now, please check out my other Animation Drawings and Cels and other original modern and contemporary artwork for sale! The item "1959 DISNEY SLEEPING BEAUTY MALEFICENT DRAGON PRINCE ORIGINAL PRODUCTION CEL" is in sale since Thursday, February 28, 2019.