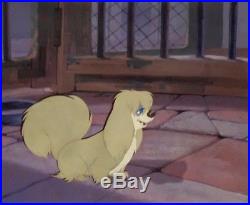 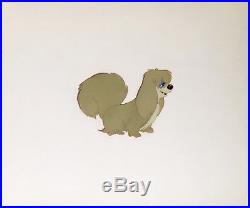 PEG PRODUCTION CEL WALT DISNEY STUDIOS GOUACHE ON CEL, 1955. Original hand inked and hand painted production animation cel of Peg set on a lithographic background from "Lady and the Tramp, " 1955, Walt Disney Studios; Unframed. "Lady and the Tramp" (released on June 22, 1955) is a full length featured animated film produced by Walt Disney and released by Buena Vista Distribution. The film was the 15th in the Walt Disney Animated Classics series, and it was the first animated feature filmed in with the CinemaScope widescreen film process. The film was based on the story "Happy Dan, The Whistling Dog" by Ward Greene and tells the story of a female American Cockeriel named Lady who lives with a refined, upper-middle-class family.

Lady meets a male stray mutt named Tramp and they embark on many exciting and romantic adventures. One evening in 1937, Disney storyman Joe Grant invited Walt Disney over to his house for dinner and ended up showed Disney a drawing he had made of his pet spingeriel, who was named Lady. Walt loved the drawing and suggested that Joe make a storyboard out of it; which he did and the plan was to create a new animated film, simply titled Lady. The story that was pitched ended up being too simplistic to Walt Disney's taste, and the project was put on hold until about 20 years later.

Besides Lady and Tramp, the standout character is the film is Peg, a Pekingese who is one of the dogs encountered by Lady when she ends up at the dog pound. Peg is named after and slightly resembles her voice actress, Peggy Lee. Peg's highlight in the film was her singing the song "He's A Tramp" in the dog pound. Lee also composed the majority of the film's soundtrack with Sonny Burke; as well as performed "He's a Tramp", "La La Lu", What Is a Baby? ", and "The Siamese Cat Song. Peg was wonderfully animated by veteran Disney animator Eric Larson. From Walt Disney animator Andreas Deja. Eric usually downplayed his capabilities as a draughtsman when compared to animators like Kahl, Davis or Frank and Ollie. But his assignments for the film Lady and the Tramp show clearly that he was not only a great actor with a pencil, but that his drawings were right on par with the studio's high standards. Peg's animation during her song "He's a Tramp" is beautifully timed in its rhythm and elegant moves. This is a wonderful full figure, eyes and mouth open, original production animation cel of Peg. Just a perfect image and a great addition to any animation art collection!

Measurements: Size - Peg: 4 x 5 1/2", Image 9 x 10 1/2". Condition: See pictures below of the actual cel, which is in excellent overall condition, as shown by the pictures below! All items we sell are from a smoke-free/mold-free home/workplace and are in excellent condition unless otherwise noted. I own every work pictured for sale and I stand behind every item.

Please follow/bookmark me as a favorite and keep and keep checking back for more items for sale in the coming weeks. For now, please check out my other Animation Drawings and Cels and other original modern and contemporary artwork for sale! The item "1955 WALT DISNEY LADY AND THE TRAMP PEG DOG ORIGINAL PRODUCTION ANIMATION CEL" is in sale since Tuesday, April 24, 2018. This item is in the category "Collectibles\Animation Art & Characters\Animation Art\Production Art".