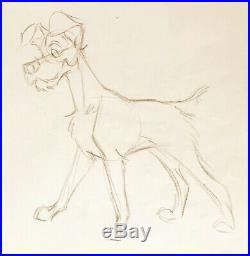 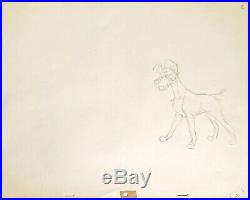 TRAMP PRODUCTION DRAWING WALT DISNEY STUDIOS GRAPHITE AND BROWN PENCILS ON PEG HOLE PAPER, 1955. Original production animation drawing of Tramp in graphite and brown pencils from "Lady and the Tramp, " 1955, Walt Disney Studios; Numbered 71 in pencil lower right; Unframed. "Lady and the Tramp" (released on June 22, 1955) is a full length featured animated film produced by Walt Disney and released by Buena Vista Distribution. The film was the 15th in the Walt Disney Animated Classics series, and it was the first animated feature filmed in with the CinemaScope widescreen film process. The film was based on the story "Happy Dan, The Whistling Dog" by Ward Greene and tells the story of a female American Cocker Spaniel named Lady who lives with a refined, upper-middle-class family. Lady meets a male stray mutt named Tramp and they embark on many exciting and romantic adventures. One evening in 1937, Disney storyman Joe Grant invited Walt Disney over to his house for dinner and ended up showed Disney a drawing he had made of his pet spinger spaniel, who was named Lady. Walt loved the drawing and suggested that Joe make a storyboard out of it; which he did and the plan was to create a new animated film, simply titled Lady. The story that was pitched ended up being too simplistic to Walt Disney's taste, and the project was put on hold until about 20 years later. Initially Tramp was called Homer and although he was first conceived as Lady's suitor, he ended up as her ex-dog pound mate in the initial 1943 storyboard pitch. A few years after that version was scrapped, Walt Disney read a story called "Happy Dan the Cynical Dog" in Cosmopolitan Magazine and decided that this was they type of character that was needed to enhance the film.

Although Walt wanted his new character to be called Tramp, the animators feared that audiences would take offense in such a name, due to the word's sexual connotations that had been popularized by the song The Lady Is A Tramp. The animators first called the character Rags, then Bozo; before Walt insisted that that name Tramp would be acceptable.

Tramp is a very laid-back dog and acts more like a kid. He's flirtatious and has history of having had a multitude of girlfriends; and he's known for his street smarts, able to both avoid dog catchers and deal with junkyard dogs.

However, he dreams about living with a family and in a loving home. Tramp was animated by Ollie Johnston, Milt Kahl, and Wolfgang Reitherman who animated the rat fight scene. Larry Roberts (1926 - 1992) was an American voice actor and comedian who was most active in the 1950s. Although he was well known for his role in the 1950s TV series Lights, Camera, Action!

He is best remembered for his role of the voice of Tramp. This is a wonderful full figure original production drawing of Tramp, eyes open, and rendered in brown and graphite pencils. A great addition to any animation art collection!

For now, please check out my other Animation Drawings and Cels and other original modern and contemporary artwork for sale! The item "1955 WALT DISNEY LADY AND THE TRAMP ORIGINAL PRODUCTION ANIMATION DRAWING CEL" is in sale since Wednesday, September 11, 2019. This item is in the category "Collectibles\Animation Art & Characters\Animation Art\Production Art". The seller is "shadowline" and is located in Durham, North Carolina.