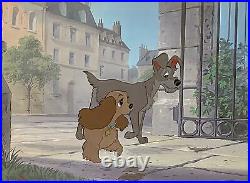 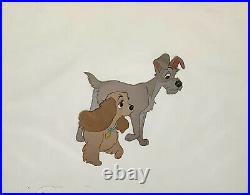 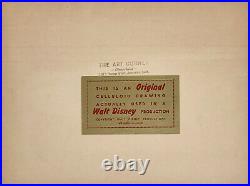 LADY AND THE TRAMP PRODUCTION CELS WALT DISNEY STUDIOS GOUACHE ON CELLULOID, 1955. Original hand inked and hand painted production cels of Lady and Tramp set on a lithographic background from "Lady and the Tramp, " 1955, Walt Disney Studios; With original Walt Disney Art Corner label sticker verso; Unframed. "Lady and the Tramp" (released on June 22, 1955) is a full length featured animated film produced by Walt Disney and released by Buena Vista Distribution. The film was the 15th in the Walt Disney Animated Classics series, and it was the first animated feature filmed in with the CinemaScope widescreen film process. The film was based on the story "Happy Dan, The Whistling Dog" by Ward Greene and tells the story of a female American Cocker Spaniel named Lady who lives with a refined, upper-middle-class family.

The item "1955 RARE WALT DISNEY LADY AND THE TRAMP ORIGINAL PRODUCTION ANIMATION CEL" is in sale since Wednesday, December 30, 2020. This item is in the category "Collectibles\Animation Art & Characters\Animation Art\Production Art". The seller is "shadowline" and is located in Durham, North Carolina. This item can be shipped worldwide.