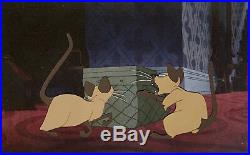 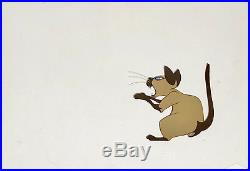 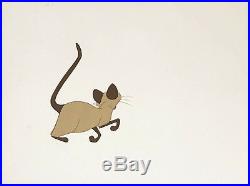 We are Siamese if you please. We are Siamese if you don't please. "Lady and the Tramp" (released on June 22, 1955) is a full length featured animated film produced by Walt Disney and released by Buena Vista Distribution. The film was the 15th in the Walt Disney Animated Classics series, and it was the first animated feature filmed in with the CinemaScope widescreen film process. The film was based on the story "Happy Dan, The Whistling Dog" by Ward Greene and tells the story of a female American Cocker Spaniel named Lady who lives with a refined, upper-middle-class family. Lady meets a male stray mutt named Tramp and they embark on many exciting and romantic adventures. One evening in 1937, Disney storyman Joe Grant invited Walt Disney over to his house for dinner and ended up showed Disney a drawing he had made of his pet spinger spaniel, who was named Lady. Walt loved the drawing and suggested that Joe make a storyboard out of it; which he did and the plan was to create a new animated film, simply titled Lady. The story that was pitched ended up being too simplistic to Walt Disney's taste, and the project was put on hold until about 20 years later. The cats were only in the film "Lady and the Tramp" for a very short amount of time; however their film time is very much remembered and loved. With their names combined, "Siam" is the former name of the Kingdom of Thailand, referencing the cats' heritage.

Their physical appearance is sleek, with cream colored coats, angular wedge-shaped faces, and large blue almond eyes. They have deep brown facial points with a darker, almost black muzzle with dark triangular ears; and their noses are black and small, and both have two middle incisors that hang over their lower lip. She also composed the majority of the film's soundtrack with Sonny Burke; as well as performed "He's a Tramp", "La La Lu", What Is a Baby?

", and of course "The Siamese Cat Song! During their song, the cats wreak havoc throughout the house, claiming it as their own, and even attempt to eat both the family fish and family bird! During the closure of their song, Lady ferociously chases after them upon hearing of their intentions to sample some of the newborn baby's milk. I have never seen any production drawings of the cats on the market. In this two cel setup both cats are full figure and are already involved in wrecking havoc upon the home of Lady.

An absolutely fantastic piece of vintage Walt Disney animation artwork, perfect for any collection! Condition: See pictures of the actual cels which are in excellent overall condition, despite minor cel loss lower right corner to one cat cel that is outside the background image as shown by the pictures above! All items we sell are from a smoke-free/mold-free home/workplace and are in excellent condition unless otherwise noted.

I own every work pictured for sale and I stand behind every item. Please follow/bookmark me as a favorite and keep and keep checking back for more items for sale in the coming weeks. For now, please check out my other Animation Drawings and Cels and other original modern and contemporary artwork for sale! The item "1955 DISNEY LADY AND THE TRAMP SI AND AM CATS ORIGINAL PRODUCTION ANIMATION CEL" is in sale since Thursday, April 18, 2019.