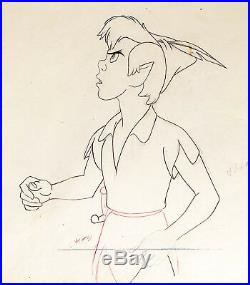 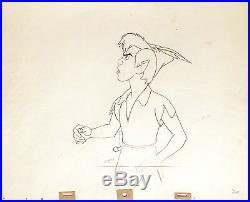 Face-to-face with the terrible Captain Hook, Peter dispatches that pirate with jaunty ease. Peter is at home with mermaids and understands their language. He is twelve years old forever simply because he refuses to grow up beyond that comfortable age. Most remarkable of all, he knows where Never Land is and how to get there. Barrie first used Peter Pan as a character in a section of the adult novel "The Little White Bird" in 1902. The play ran until 1913, and it was later adapted by Walt Disney for the animated feature film entitled, "Peter Pan, " in 1953. The main character of Peter Pan was animated by Milt Kahl and Eric Larson. Kahl did the majority of the animation sequences with Larson working mainly on the flying to London sequence, as well as some animation work on both Wendy Darling and Captain Hook. Milt Kahl was not very excited about his assignment for Peter Pan.

He had to animate both Peter Pan and Wendy Darling; two characters that had to be handled like real human beings and therefore would be a great challenge. Peter was interesting in that you had to make him fly but after that was over he became a chore, said Kahl. "Peter Pan's" supervising animator, Ron Clements, remembered that for years Milt Kahl resented the fact that animator Frank Thomas was assigned the character of Captain Hook instead of him. It is interesting to note that Peter Pan is one of the most interesting male protagonists of the early Walt Disney films because he is very heroic, opinionated, and has a zeal for life.

Kahls animation of him totally embraces those characteristics as well as his great grace, expert timing, all combined with a very appealing artistic design. Bobby Driscoll was the first actor Walt Disney ever put under contract, and was cast to play the lead character in the 1946 film Song of the South. The film would introduce live action into an extensive animation based film.

The film was very successful and turned Driscoll, and his co-star Luana Patten, into overnight child stars! The pair were even discussed for a special Academy Award as the best child actors of the year.

Driscoll went on to appear in a large number of specials and to star in some of The Walt Disney Company's most popular live-action pictures of that period, such as "So Dear to My Heart" in 1948, and in the role of Jim Hawkins in "Treasure Island" in 1950. This last role earned him a star on the Hollywood Walk of Fame. In 1953, he served as animation model and provided the voice for the title role in "Peter Pan, " Driscoll's last major success.

Driscoll was cast opposite Disney's "Little British Lady" Kathryn Beaumont, who was in the role of Wendy Darling. Driscoll was the model for all the close up Peter Pan scenes and the dancer and choreographer Roland Dupree was the model for the character's motion sequences. All the live action model scenes were played out on an almost empty sound stage with only the most essential props, and filmed for use by the animators. This drawing is from the part in the film when Peter Pan charges Tinker Bell for urging the Lost Boys to shoot down Wendy from the sky; after she, Michael, and John had just arrived in Never Land. Tinker Bell confess her guilt and Peter declares I hereby banish you forever! " But Wendy suggests leniency and this drawing is from the scene when Peter call out "Well, for a week then. This is the largest drawing that I have ever owned of Peter Pan, and is an outstanding work that is perfect for any animation art collection! Measurements: Size - Peter Pan: 9 1/2 x 7", Sheet 12 1/2 x 15 1/2". Condition: See pictures below of the actual drawing, which is in excellent overall condition despite minor staining lower left sheet edge and interior of the hat feather as shown by the pictures above!