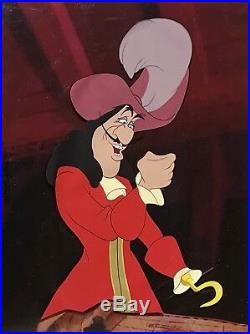 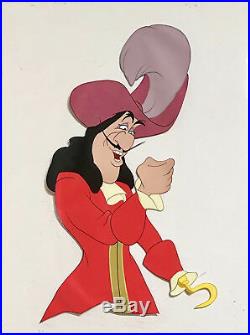 CAPTAIN HOOK PRODUCTION CEL WALT DISNEY STUDIOS GOUACHE ON CEL, 1953. Original hand inked and hand painted production animation cel of Captain Hook from "Peter Pan, " 1953, Walt Disney Studios; Set on a lithographic background; Unframed. So that's the entrance to his hiding place. You've been most helpful. Barrie first used Peter Pan as a character in a section of the adult novel "The Little White Bird" in 1902. The play ran until 1913, and it was later adapted by Walt Disney for the animated feature film entitled, "Peter Pan, " in 1953. Captain Hook was animated by legendary Frank Thomas and voiced by Hans Conried. Conried was also the voice of George Darling, which is consistent with the roles of "Peter Pan" for the stage. Conried was also an accomplished actor, appearing on "I Love Lucy" where he played an English tutor as well as playing the character Wrongway Feldman on Gilligan's Island. His voice was so distinctive and so memorable that he was perfect for the role of Captain Hook; as he had a wonderful way of conveying both the rough gruff pirate role as well and the sly calculating villain.

The legendary Frank Thomas animated Captain Hook, and his first sketches were much more menacing than the final product. Walt Disney felt the character was going to be too frightening for children and so Thomas toned down his drawings.

The result is a wonderful villain and always rated as one the top male villains in the Disney film world. From Disney animator Andreas Deja: Many of you would agree that Captain Hook is one of Frank Thomas' best creations. To some Frank is the best animator who ever lived. He used live action reference for a number of his characters. In this case it was character actor Hans Conried who provided the voice and acting reference for Hook. Frank was very critical about the way other animators used live action. To him the acting ideas were all you needed, but you still had to pass judgement on the footage and interpret what the actor gave you. His animation never has that roto, floaty feel to it. For one thing Frank was way too talented and smart to let that happen. After Captain Hook and Mr. Smee captures Tinker Bell, they convince her that Wendy is responsible for coming between her and Peter Pan. Hook says that he will "shanghai" Wendy, explaining that he will Take her to sea with us. With her gone, Peter will soon forget this mad infatuation. However, in order to capture Wendy, Hook needs to know the location of Peter's secret hiding place. After Hook promises not to lay a finger or a hook on Peter Pan, Tinker Bell reveals that Peter's home is Hangman's Tree. Hook grabs Tinker Bell in is left hand and says, Ah, Hangman's Tree. This is a fantastic cel of Captain Hook standing behind his map of Neverland, and after he has grabbed Tinker Bell in his hand (just before locking her inside of a lantern). Hook is eyes and mouth open, and his gold hook is in clear view. A great addition to any Walt Disney vintage animation art collection! Measurements: Size - Captain Hook: 8 1/2 x 5", Image 10 x 7 1/2". Condition: See pictures below of the actual cel, which is in excellent overall condition as shown by the pictures below! All items we sell are from a smoke-free/mold-free home/workplace and are in excellent condition unless otherwise noted.

I own every work pictured for sale and I stand behind every item. Please follow/bookmark me as a favorite and keep checking back for more items for sale in the coming weeks. For now, please check out my other Drawings and Cels and other original modern and contemporary artwork for sale! The item "1953 RARE WALT DISNEY PETER PAN CAPTAIN HOOK ORIGINAL PRODUCTION ANIMATION CEL" is in sale since Friday, January 18, 2019.