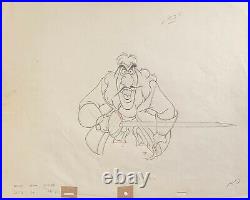 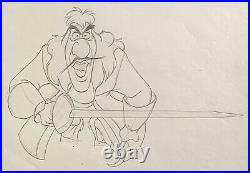 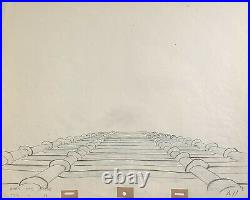 Ha ha ha, you wouldnt dare fight old Hook man to man. Youd fly away like a cowardly sparrow. Barrie first used Peter Pan as a character in a section of the adult novel "The Little White Bird" in 1902. The play ran until 1913, and it was later adapted by Walt Disney for the animated feature film entitled, "Peter Pan, " in 1953.

Captain James Bartholomew Hook was initially designed by Milt Kahl animated by legendary Frank Thomas and Wolfgang Reitherman. Hook voiced by Hans Conried who was also the voice of George Darling, which is consistent with the roles of "Peter Pan" for the stage.

Conried was a well known actor including roles on "I Love Lucy" where he played an English tutor as well as playing the character Wrongway Feldman on Gilligan's Island. His voice was so distinctive and so memorable that he was perfect for the role of Captain Hook; as he had a wonderful way of conveying both the rough gruff pirate role as well and the sly calculating villain. From Disney animator Andreas Deja.

Many of you would agree that Captain Hook is one of Frank Thomas' best creations. To some Frank is the best animator who ever lived. He used live action reference for a number of his characters. In this case it was character actor Hans Conried who provided the voice and acting reference for Hook. Frank was very critical about the way other animators used live action.

To him the acting ideas were all you needed, but you still had to pass judgement on the footage and interpret what the actor gave you. His animation never has that roto, floaty feel to it. For one thing Frank was way too talented and smart to let that happen.

Frank Thomas's first sketches of Captain Hook were much more menacing than the final product. Walt Disney felt the character was going to be too frightening for children and so Thomas toned down his drawings. The result is a wonderful character with comic overtones, and is one of the favorite male villains in the Disney film world. Also of note is that Captain Hook has also made more appearances in visual media than any of the Disney film Villains, combined!

Hook has both eyes open and a wickedly evil smile. The key matching production animation drawing of the rope ladder is very rare and a great addition to the Captain Hook drawing. As Hook climbs up the rope ladder he says to Peter Pan, Ha ha ha, you wouldnt dare fight old Hook man to man. A rare and important set of drawings and a great addition to any art collection! Size - Captain Hook: 6 3/4 x 9 3/4", Rope Ladder: 4 x 15 1/2", Both sheets 12 1/2 x 15 1/2. Condition: See pictures of the actual drawings which are in excellent overall condition as shown above! All items we sell are from a smoke-free/mold-free home/workplace and are in excellent condition unless otherwise noted. I own every work pictured for sale and I stand behind every item.

Please follow/bookmark me as a favorite and keep and keep checking back for more items for sale in the coming weeks. For now, please check out my other Animation Drawings and Cels and other original modern and contemporary artwork for sale! S ize - Captain Hook: 6 3/4 x 9 3/4", Rope Ladder: 4 x 15 1/2", Both sheets 12 1/2 x 15 1/2. The item "1953 DISNEY PETER PAN CAPTAIN HOOK ORIGINAL PRODUCTION ANIMATION DRAWING CEL" is in sale since Wednesday, July 21, 2021. This item is in the category "Collectibles\Animation Art & Merchandise\Animation Art".