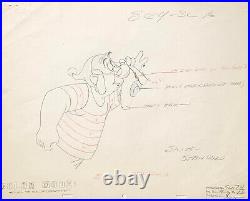 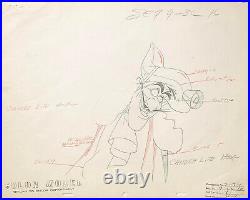 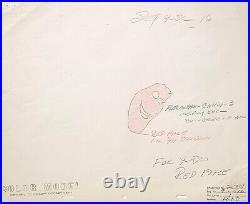 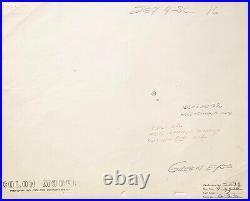 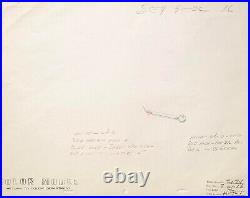 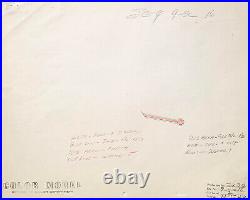 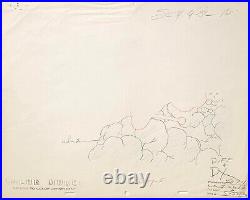 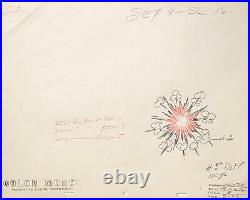 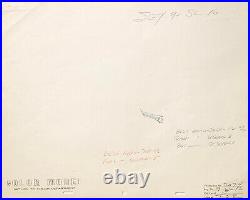 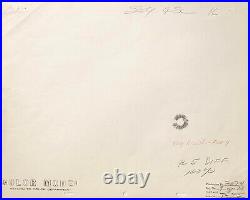 Smee, Thermometer, & Special Effects in red, green, blue, and graphite pencils from "Peter Pan, " 1953, Walt Disney Studios; Production numbers and extensive notes throughout the sheets; Unframed. You know, there's trouble brewin' on the island. I wouldn't want this to go any further, but... The cook told me that the first mate told him... That he heard that Pan has banished Tinker Bell. Barrie first used Peter Pan as a character in a section of the adult novel "The Little White Bird" in 1902.

The play ran until 1913, and it was later adapted by Walt Disney for the animated feature film entitled, "Peter Pan, " in 1953. Captain Hook was animated by legendary Frank Thomas and voiced by Hans Conried. Conried was also the voice of George Darling, which is consistent with the roles of "Peter Pan" for the stage. Conried was also an accomplished actor, appearing on "I Love Lucy" where he played an English tutor as well as playing the character Wrongway Feldman on Gilligan's Island. His voice was so distinctive and so memorable that he was perfect for the role of Captain Hook; as he had a wonderful way of conveying both the rough gruff pirate role as well and the sly calculating villain.

The legendary Frank Thomas animated Captain Hook, and his first sketches were much more menacing than the final product. Walt Disney felt the character was going to be too frightening for children and so Thomas toned down his drawings. The result is a wonderful villain and always rated as one the top male villains in the Disney film world. From Disney animator Andreas Deja. Many of you would agree that Captain Hook is one of Frank Thomas' best creations.

To some Frank is the best animator who ever lived. He used live action reference for a number of his characters.

In this case it was character actor Hans Conried who provided the voice and acting reference for Hook. Frank was very critical about the way other animators used live action.

To him the acting ideas were all you needed, but you still had to pass judgement on the footage and interpret what the actor gave you. His animation never has that roto, floaty feel to it. For one thing Frank was way too talented and smart to let that happen. Smee was animated by Ollie Johnston and voiced by Bill Thompson.

Smee was a wonderful pirate henchman sidekick for Captain Hook and the remarkable friendship that existed between Frank Thomas and Ollie Johnston, which is well documented; may account for why the villainous pair seemed to work so well together. Of course the voice talent of Bill Thompson was also a fantastic addition. Thompson was well known already at MGM for his voice of Droopy and of Droopy's nemesis Spike. At Walt Disney studios he would have a long career as the voice of the White Rabbit and the Dodo in Alice in Wonderland, of course Mr. Smee (and some of the other pirates) in Peter Pan and King Hubert in Sleeping Beauty.

Bill Thompson's largest showcase for his voice skills was in Lady and the Tramp (1955), where he performed five different dialect parts, as Jock the Scottish Terrier, Bull the Cockney bulldog, Dachsie the German dachshund, Joe the Italian cook, and the Irish policeman in the zoo. After battling Peter Pan at Skull Rock, Captain Hook loses the fight and his chased off by the crocodile Tick Tock. He is being attended to by Mr.

Smee, who leans over and whispers in Hooks ear: You know, there's trouble brewin' on the island. " As he is speaking to Hook, the kettle full of hot water that he is holding pours into the Hook's foot bath raising the thermometer temperature and causing Hook to let out a "Whoa! This is an amazing and rare ten drawing set of Captain Hook, Mr Smee, the thermometer, and Hook's bulging green eyes, and multiple special effects! An amazing addition to any animation art collection! Size - Captain Hook & Water Bottle: 9 x 8 1/4, Mr.

Smee: 7 1/2 x 6 1/2", Sheets 12 1/2 x 15 1/2". Condition: See pictures of the actual drawings which are in excellent overall condition as shown above! All items we sell are from a smoke-free/mold-free home/workplace and are in excellent condition unless otherwise noted. I own every work pictured for sale and I stand behind every item. Please follow/bookmark me as a favorite and keep and keep checking back for more items for sale in the coming weeks.

For now, please check out my other Animation Drawings and Cels and other original modern and contemporary artwork for sale! This item is in the category "Collectibles\Animation Art & Merchandise\Animation Art". The seller is "shadowline" and is located in this country: US. This item can be shipped worldwide.