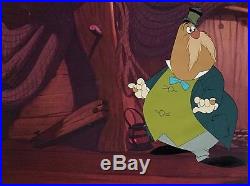 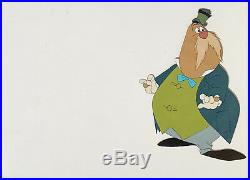 WALRUS PRODUCTION CEL WALT DISNEY STUDIOS GOUACHE ON CEL, 1951. Original hand inked and hand painted production animation cel of The Walrus set on a lithographic background from "Alice In Wonderland, " 1951, Walt Disney Studios; Unframed. The time has come my little friends to talk of other things; of shoes and ships and ceiling wax of cabbages and kings. "Alice's Adventures in Wonderland" (commonly shortened to "Alice in Wonderland"), is a 1865 novel written by English author Charles Lutwidge Dodgson who wrote under the pseudonym Lewis Carroll. Disney reworked the story to fit with both a younger audience and a time frame suitable for an animated film (it's run time is only 75 minutes).

Disney was so impressed by her that she was also chosen to be the model for Alice, and would also go on to provide the voice for Wendy in "Peter Pan, " 1953. Beaumont has also reprised her voice acting role as Alice in two episodes of the animated series, Disney's "House of Mouse, " and as both Alice and Wendy in the video game Kingdom Hearts. She did not retire as the voice of Alice and Wendy until 2005, when her role for these two characters was taken over by Hynden Walch. One of the most memorable segments of "Alice In Wonderland" were the two characters The Walrus and The Carpenter. Both of them were voiced by J.

Pat O'Malley and they were animated by John Lounsbery, Ward Kimball, Wolfgang Reitherman, and Charles A. They were originally created by Lewis Carroll for his book Through the Looking Glass. Pat O'Malley had a long history with voice work for Disney: he was the Cockney guy in the "Supercalifragilisticexpialidocious" sequence in "Mary Poppins, " 1964, Cyril Proudbottom, Winkie, and a policeman in The Adventures of Ichabod and Mr.

The Walrus acts as the leader of the duo and in many ways he is like Honest John from Pinocchio. They are both conniving moochers who will resort to trickery to get what they want. Finding a job and working is the last thing on The Walrus's mind, regardless of his constant ramblings of "cabbages and kings" (his way of saying that his future will soon be bright). He is also very greedy and tricks The Carpenter into leave the room so that he can eat all of the naive oysters (whom he had convinced to follow him ashore and into a restaurant that The Carpenter built out of left over remnants from a boat). This is a wonderful cel of The Walrus; he is full figure, eyes open, and dressed in his hobo suit complete with a torn top hat and white gloves with holes at the fingertips.

A great image of one of the most memorable characters that Alice encounters on her trip through Wonderland. A fantastic piece of vintage Walt Disney animation artwork that is perfect for any collection! Measurements: Size - Walrus: 7 x 5"; Image 8 1/2 x 10 1/2".

The item "1951 WALT DISNEY ALICE IN WONDERLAND WALRUS ORIGINAL PRODUCTION ANIMATION CEL" is in sale since Friday, February 1, 2019. This item is in the category "Collectibles\Animation Art & Characters\Animation Art\Production Art". The seller is "shadowline" and is located in Durham, North Carolina. This item can be shipped worldwide.