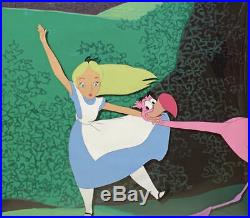 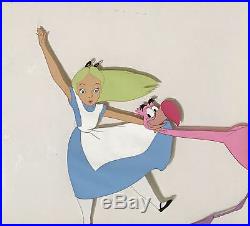 ALICE AND FLAMINGO PRODUCTION CEL WALT DISNEY STUDIOS GOUACHE ON CEL, 1951. Original hand inked and hand painted production animation cel of Alice and a Flamingo set on a lithographic background from "Alice In Wonderland, " 1951, Walt Disney Studios; With original Art Corner Certificate sticker; Unframed. "Alice's Adventures in Wonderland" (commonly shortened to "Alice in Wonderland"), is a 1865 novel written by English author Charles Lutwidge Dodgson who wrote under the pseudonym Lewis Carroll. Disney reworked the story to fit with both a younger audience and a time frame suitable for an animated film (it's run time is only 75 minutes).

Alice was animated by Ollie Johnston, Don Lusk, and Marc Davis who animated her for the tea party scene. Measurements: Size - Alice & Flamingo: 7 1/4 x 8", Image 8 1/4 x 9 1/4". Condition: See pictures of the actual cel, which is in excellent overall condition as shown above! All items we sell are from a smoke-free/mold-free home/workplace and are in excellent condition unless otherwise noted. I own every work pictured for sale and I stand behind every item. Please follow/bookmark me as a favorite and keep and keep checking back for more items for sale in the coming weeks. For now, please check out my other Animation Drawings and Cels and other original modern and contemporary artwork for sale! The item "1951 WALT DISNEY ALICE IN WONDERLAND FLAMINGO ORIGINAL PRODUCTION ANIMATION CEL" is in sale since Wednesday, February 5, 2020. This item is in the category "Collectibles\Animation Art & Characters\Animation Art\Production Art". The seller is "shadowline" and is located in Durham, North Carolina. This item can be shipped worldwide.