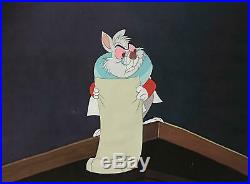 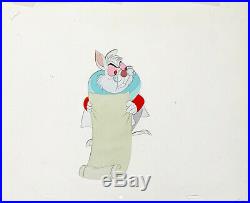 Initial design for the character of Alice was accomplished by Mary Blair during the storyboard phase and also by Les Clark. Alice was animated by Ollie Johnston, Don Lusk, and Marc Davis who animated her for the tea party scene. The White Rabbit is one of the most well known and referenced fictional characters in Lewis Carroll's book Alice's Adventures in Wonderland. " He first appears in chapter one, wearing a waistcoat, and muttering "Oh dear! I shall be too late! Alice follows him down the rabbit hole into Wonderland, and encounters him again when he mistakes her for his housemaid Mary Ann.

No time to say hello, goodbye! He was animated by various animators including: Fred Moore, Ward Kimball, Judge Whitaker, and Wolfgang Reitherman. But most of the work was done by either Fred Moore or Ward Kimball; both of whom were wonderful at bringing this type of exaggerated character to life. The White Rabbit was voiced by American Radio and Voice Actor Bill Thompson.

Thompson had an extraordinary career spanning from the 1930's until he passed away in 1971. He worked extensively for Walt Disney Studios, and can be heard in many shorts and features, often in either dialect parts or a variation of his famous and masterful Wimple/Droopy voice. For "Alice In Wonderland, " he was the voice of both the White Rabbit and the Dodo. He went on to be the voice of Mr. Smee (and the other pirates) in "Peter Pan, " and also King Hubert in Sleeping Beauty. This is a wonderful original production animation cel of the White Rabbit. He is a very nice full figure image, wearing his eyeglasses, eyes open, and is holding Alice's trial charge document. The cel is from the beginning of the scene when Alice is being put on trail and the White Rabbit begins to address the courtroom: Huh...

" The King of Hearts says "H-hem... And taps the White Rabbit on the shoulder to remind him not to forget to mention him. The White Rabbit looks at him a bit annoyed and says... " The white Rabbit continues and says "The prisoner at the bar is charged with enticing Her Majesty, the Queen of Hearts, into a game of croquet and thereby willfully and with malice aforethought, teasing, tormenting and otherwise annoying our beloved...

Thereby causing the Queen to lose her temper. This is an absolutely beautiful piece of vintage Walt Disney animation art and a great addition to any animation collection! Measurements: Size - White Rabbit: 6 1/4 x 3 1/2", Image 8 1/4 x 11". Condition: See pictures of the actual cel, which is in excellent overall condition, as shown above! All items we sell are from a smoke-free/mold-free home/workplace and are in excellent condition unless otherwise noted. I own every work pictured for sale and I stand behind every item. Please follow/bookmark me as a favorite and keep and keep checking back for more items for sale in the coming weeks. For now, please check out my other Animation Drawings and Cels and other original modern and contemporary artwork for sale! The item "1951 DISNEY ALICE IN WONDERLAND WHITE RABBIT ORIGINAL PRODUCTION ANIMATION CEL" is in sale since Sunday, November 17, 2019.