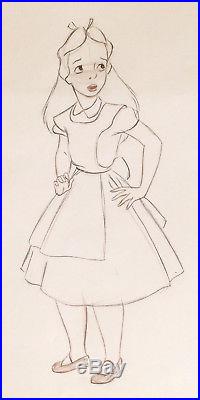 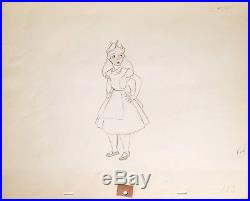 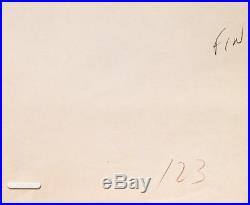 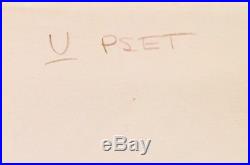 ALICE PRODUCTION DRAWING WALT DISNEY STUDIOS GRAPHITE, RED, & BROWN PENCILS ON PEG HOLE PAPER, 1951. Original production animation drawing of Alice in graphite, red, and brown pencils from "Alice In Wonderland, " 1951, Walt Disney Studios; Alice's dialogue of "UPSET" in pencil upper right and numbered 123 in pencil lower right; Unframed. Goodness, if the people here are like that I must try not to upset them! "Alice's Adventures in Wonderland" (commonly shortened to "Alice in Wonderland"), is a 1865 novel written by English author Charles Lutwidge Dodgson who wrote under the pseudonym Lewis Carroll. Disney reworked the story to fit with both a younger audience and a time frame suitable for an animated film (it's run time is only 75 minutes). Kathryn Beaumont, who was born in London England, was just 10 years old when she was chosen for the voice of Alice. Walt Disney personally cast Beaumont after seeing her in the film "On an Island with You, " in which the child actress had a small role. Disney was so impressed by her that she was also chosen to be the model for Alice, and would also go on to provide the voice for Wendy in "Peter Pan, " 1953. Beaumont has also reprised her voice acting role as Alice in two episodes of the animated series, Disney's "House of Mouse, " and as both Alice and Wendy in the video game Kingdom Hearts. She did not retire as the voice of Alice and Wendy until 2005, when her role for these two characters was taken over by Hynden Walch. Initial design for the character of Alice was accomplished by Mary Blair during the storyboard phase and also by Les Clark. Alice was animated by Ollie Johnston, Don Lusk, and Marc Davis who animated her for the tea party scene.

Towards the end of Alice's first encounter with the Cheshire Cat, she was advised to seek The Mad Hatter... The March Hare, " who is "mad too.

" Alice says that she does not "want to go among mad people, " and the Cheshire Cat replies "Oh, you can't help that... Most everything's mad here. " In the last scene of this sequence Alice then says, "Goodness, if the people here are like that I must try not to upset them! This is a wonderful full figure original production animation drawing of Alice. She is eyes and mouth open, her hands on her hips, and she looking above her at the Cheshire Cat.

Condition: See pictures below of the actual drawing, which is in excellent overall condition, as shown by the pictures below! All items we sell are from a smoke-free/mold-free home/workplace and are in excellent condition unless otherwise noted. I own every work pictured for sale and I stand behind every item. Please follow/bookmark me as a favorite and keep and keep checking back for more items for sale in the coming weeks.

For now, please check out my other Animation Drawings and Cels and other original modern and contemporary artwork for sale! The item "1951 DISNEY ALICE IN WONDERLAND LARGE ORIGINAL PRODUCTION ANIMATION DRAWING CEL" is in sale since Thursday, February 22, 2018.