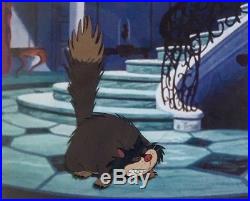 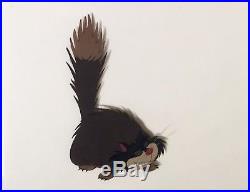 The film was the second in the series of great Princess films developed by Disney, the first being Snow White in 1937. The character of Cinderella is usually front and center in the pantheon of Disney Princess merchandise, perhaps because she is the only Princess not to be of a noble blood line who ended up marrying a Prince and becoming royalty. Lucifer was the name of the pet cat of Lady Tremaine, Cinderella's evil Stepmother. The name Lucifer, a synonym of Satan, was chosen by Walt Disney himself probably due to his known hatred of cats.

Lucifer was largely created for comic relief from the main storyline of Cinderella. Ward Kimball, the animator for Lucifer, was also responsible for the comedic subplot of the cat-and-mouse chase scenes between the cat and the two featured mice of the film, Jaq and Gus. His design for Lucifer was largely inspired by a pet cat belonging to Kimball himself; and Kimball's excellent animation skills have made Lucifer one of Disney's greatest Villains! Lucifer was voiced by the very well known voice actress, June Foray.

Foray worked for many different animation studios and is probably most well known as the voice of Cindy Lou Who, in Chuck Jone's holiday favorite "How The Grinch Stole Christmas, " 1966. Chuck Jones is reported to have said, June Foray is not the female Mel Blanc, Mel Blanc was the male June Foray.

This is a wonderful original production animation cel of Lady Tremaine's wicked and sinister cat, Lucifer. Original artwork of Lucifer is very rare and this is a great piece.

He is full figure with a great facial expression and the fur on his tail is standing on end. A great piece of vintage Walt Disney animation artwork from the full length masterpiece Cinderella! Measurements: Size - Lucifer 5 1/2 x 3 1/2", Image 6 1/2 x 8 1/4".

Condition: See pictures below of the actual cel, which is in excellent overall condition as shown by the pictures below! All items we sell are from a smoke-free/mold-free home/workplace and are in excellent condition, unless otherwise noted. I own every work pictured for sale and I stand behind every item.

Please follow/bookmark me as a favorite and keep and keep checking back for more items for sale in the coming weeks. For now, please check out my other Animation Drawings and Cels and other original modern and contemporary artwork for sale! The item "1950 RARE WALT DISNEY CINDERELLA LUCIFER CAT ORIGINAL PRODUCTION ANIMATION CEL" is in sale since Monday, April 23, 2018. This item is in the category "Collectibles\Animation Art & Characters\Animation Art\Production Art". The seller is "shadowline" and is located in Durham, North Carolina.