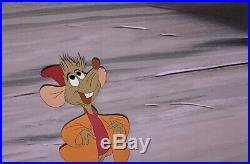 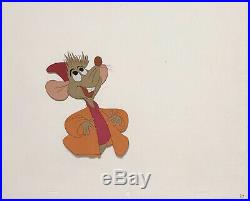 The 1950 Walt Disney feature film "Cinderella" was based on the French version of the tale by Charles Perrault, entitled "Cinderella" and written in 1698. The film was the second in the series of great Princess films developed by Disney, the first being Snow White in 1937. The character of Cinderella is usually front and center in the pantheon of Disney Princess merchandise, perhaps because she is the only Princess not to be of a noble blood line who ended up marrying a Prince and becoming royalty.

Cinderella was animated by both Marc Davis and Eric Larson, however the two animators had different perceptions of the character, with Davis preferring elegance and Larson opting for simplicity. This actually worked in the film's favor, resulting in Cinderella being a much more complicated character than her predecessor Snow White.

As with other Disney films, the studio hired actress Helene Stanley to perform the live-action reference for Cinderella. She would later return to the studio for the characters of Aurora in "Sleeping Beauty, " 1959 and Anita Radcliffe in "One Hundred and One Dalmatians, " 1961. About 400 women and girls auditioned for the voice role of Cinderella, but the role ended up going to Ilene Woods.

Woods, who at the time worked on the radio and did not know anything about the audition, was asked one day by her colleagues Mack David and Jerry Livingston to sing a song from Cinderella. Without her knowledge, her recording was given by her friends to Disney Studios. After listening to the material Walt Disney immediately decided that he had found the voice with which to speak and sing the character of Cinderella and contacted Ilene. Cinderella had many mice and bird friends in the film and named mice include Mert, Bert, Luke, Suzie, and of course the two mice stars, Gus and Jaq. Gus and Jaq were both animated by Fred Moore and Ward Kimball and their animation sequences in the film many times rival the sequences revolving around Cinderella. Jaq was thin with a dark red shirt and hat and wore an orange coat, while Gus was larger, more stout in size with a green hat and wore a light green shirt that was a bit too small for him. Both had dark red shoes and both were voiced by veteran Walt Disney sound engineer and voice actor James MacDonald (who also provided the voice of Bruno the dog). James MacDonald was a British-born voice actor and he was the original head of the Walt Disney sound effects department. In addition to directing sounds for the early Disney animated shorts such as "Mickey's Trailer, " 1938, he developed many original inventions and contraptions in order to achieve unique and expressive sounds for characters like Casey Jr. The circus train engine from "Dumbo, " 1941; Evinrude the dragonfly from "The Rescuers, " 1977; and the bees in "Winnie the Pooh and the Honey Tree, " 1966. He also made the sound effects for Tick Tock the crocodile from "Peter Pan, " 1953 and used castanets for the sound of Maleficent as the Dragon from "Sleeping Beauty" 1959. His voice acting work for Disney began early and included doing the yodeling for the Dwarfs in "Snow White and the Seven Dwarfs, " 1937 as well as doing some sounds for Dopey such as his hiccuping and sobbing.

By 1947, Walt Disney was getting too busy and too hoarse from all of his smoking to continue voicing the character of Mickey Mouse. Disney was replaced by MacDonald, who voiced some parts of Mickey for "Fun and Fancy Free, " 1947.

Soon MacDonald completely took over as the voice of Mickey Mouse until 1977, when he was replaced by another young Disney sound effects man Wayne Allwine. This is an absolutely wonderful original production animation cel of Jaq Mouse. He is eyes and mouth open, and has a great big smile. He is sporting his red cap and shirt, while wearing his orange overcoat with his hands (paws) in front of him. A large image and a rarely seen character in original production artwork, and he would be a great addition to any animation art collection!

Measurements: Size - Jaq: 5 x 4", Image 7 1/4 x 11". Condition: See pictures of the actual cel which is in excellent overall condition as shown above!

Please follow/bookmark me as a favorite and keep checking back for more items for sale in the coming weeks. For now, please check out my other Drawings and Cels and other original modern and contemporary artwork for sale! The item "1950 RARE WALT DISNEY CINDERELLA JAQ MOUSE ORIGINAL PRODUCTION ANIMATION CEL" is in sale since Monday, January 6, 2020.