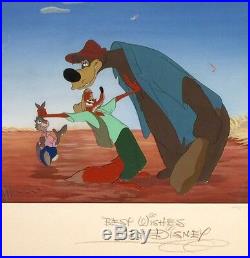 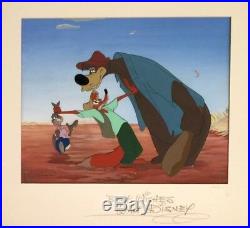 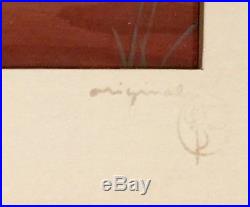 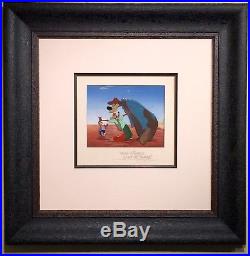 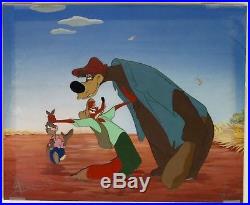 Because of the film's depiction of black former slaves and of race relations in Reconstruction-Era Georgia; the film has been controversial since its original release. A number of critics, both at the time of its release and in later decades, have described the film as racist. Consequently, "Song of the South" has never been released in its entirety on home video in the United States. Br'er Bear is slow-witted (compared to Br'er Fox and Br'er Rabbit) and prone to violence when provoked. He is gullible which leaves him open to being tricked repeatedly by Br'er Rabbit, even when he accompanies the more sly Br'er Fox.

Br'er Bear is a tall grizzly bear, with brown fur, a cream muzzle, large black nose, wearing a blue unbuttoned dress shirt, and a red fedora. He may be one of the most cruel and heatless of all the Disney villains. And, in referring to Br'er Rabbit, his most memorable quote is I'm just gonna knock his head clean off!

Johnny Lee (an African-American singer, dancer and actor) provided the voice of Br'er Rabbit and Br'er Fox was voiced by James Baskett; who also was the star of the film portraying Uncle Remus. In recognition of his warm portrayal of the famous black storyteller, Baskett was given an Honorary Academy Award; making him the very first black male performer to receive an Oscar.

At least a dozen different Walt Disney Studio staff members signed Walt Disney's name to a variety of items including: comics, fan items, and promotional materials. However, original artwork that was presented to VIPs was signed by an authorized individual; and Hank Porter was the first to be authorized to sign Walt Disney's autograph, instead of Walt Disney himself. The most common proxy signatures that exist on artwork are by Hank Porter in the 1930's & 1940's, and Bob Moore beginning in the 1950's. Hank Porter (1900 - 1951) was a member of Disney advertising artistic service that was part of the Publicity Art Department from 1935 to 1950.

He is the artist of the Sunday pages with the movie characters'Snow White and the Seven Dwarfs' and'Pinocchio'. Snow White and the Seven Dwarfs' appeared in the Sunday pages of the American newspapers from 12 December 1937 to 24 April 1938. Note that the actual movie wasn't released until 27 December, so the comic began its run prior to the film's release. His'Pinocchio' Sunday ran from December 1939 to April 1940. The adaptations were written by Merrill De Maris and inked by Bob Grant. Porter also did several covers and illustrations for Mickey Mouse Magazine and Dell's Walt Disney's Comics and Stories. Walt also had Porter head up the World War II insignia unit, where in addition to supervising (and in many cases drawing) the more that a thousand insignia created by Disney, he also did a ton of other specialty drawing focused on the war effort. This is perhaps one of the greatest original production animation cels that exists from The Song of the South! Br'er Fox, Br'er Bear, and Br'er Rabbit are full figure, eyes open, and Br'er Fox and Br'er Bear are mouth open showing their sharp teeth.

Br'er Rabbit has a wonderful sly smile and the cel has been placed on an original hand painted production background. The original Courvoisier stamped mat has been Studio signed "Best Wishes Walt Disney" (presumably by Hank Porter). The dialog for this scene from the film is below: Br'er Fox: No!

I own every work pictured for sale and I stand behind every item. Please follow/bookmark me as a favorite and keep checking back for more items for sale in the coming weeks. For now, please check out my other Drawings and Cels and other original modern and contemporary artwork for sale! The item "1946 WALT DISNEY SIGNED SONG OF THE SOUTH ORIGINAL PRODUCTION CEL & BACKGROUND" is in sale since Tuesday, March 12, 2019.