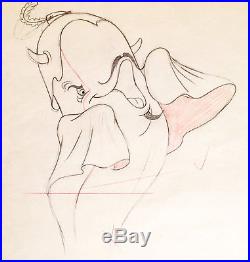 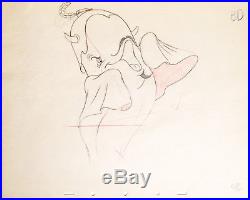 WILLIE THE WHALE PRODUCTION DRAWING WALT DISNEY STUDIOS GRAPHITE & RED PENCILS ON PEG HOLE PAPER, 1946. Original production animation drawing of Willie The Whale in the role of Mephistopheles in red and graphite pencils from "The Whale Who Wanted To Sing at the Met" section of "Make Mine Music, " 1946, Walt Disney Studios; Numbered 46 in pencil lower right; Unframed. "Make Mine Music, " 1946 is the 8th Walt Disney animated feature film and it was released to theaters on April 20, 1946.

During the Second World War, much of Walt Disney's staff were either drafted into the army or recruited by the U. Government to make training and propaganda films.

As a result, the studio had a large number of unfinished story ideas. In order to keep the feature film division going, Walt Disney Studios released six anthology films, including "Make Mine Music" which was composed of various unrelated segments set to music. Following Saludos Amigos and The Three Caballeros , Make Mine Music was the third package film released and was entered into the 1946 Cannes Film Festival. The film is composed of ten segments: The Martins and the Coys, Blue Bayou, All The Cats Join In, Without You, Casey at the Bat, Two Silhouettes, Peter and the Wolf, After You've Gone, Johnnie Fedora and Alice Bluebonnet , and Finale: The Whale Who Wanted To Sing at the Met.

The final segment of the film is about a sperm whale, named Willie, who has amazing musical talent and dreams of singing at the Metropolitan Opera. News spreads throughout the city about an astounding operatic whale. The short-sighted impresario Tetti-Tatti believes that the whale has swallowed an opera singer and sets out to sea to "rescue" the swallowed singer, and prove that the whale can not sing on is own. Willie's seagull friend, Whitey, brings Willie a newspaper announcing the news; and his friends believe that this is Willie's big chance to be discovered.

Willie swims out to the fishing boat to meet Tetti-Tatti and begins to sing to him and his crew. But Tetti-Tatti is now convinced that the whale has swallowed not one but three singers, because of Willie's ability to sing multiple voices at once. Tetti-Tatti now chases Willie with a harpoon, but the boat's crew try and stop him from harpooning the whale. Willie then has a dream sequence, imagining his future as an opera singer performing on the stage of the Metropolitan Opera House.

Willie the Whale was animated by Bill Tytla, Ward Kimball, Fred Moore, John Lounsbery, and Glen Keane. Nelson Eddy, an American singer and actor who appeared in 19 musical films of the 1930's and 40's, narrated and performed all the character voices.

He also recorded three-part harmonies (tenor, baritone, and bass) for Willie during his dream performance in which he had multiple voices. This is a rare and wonderful drawing of Willie the Whale from the vintage 1948 feature Walt Disney feature film Make Mine Music. During Willie's daydream sequence, he imagined himself on stage at the Metropolitan Opera in multiple roles, including: Pagliacci, Tristan and Isolde, and Mephistopheles. This a great drawing of Willie as Mephistopheles dressed in his red cape, horned and feather helmet, and complete with mustache and goatee.

A very large, action packed image, and an absolutely phenomenal piece of original animation artwork perfect for any collection! Measurements: Size - Willie The Whale: 10 x 8 3/4", Sheet 12 1/2 x 15 1/2". Condition: See pictures below of the actual drawing, which is in excellent overall condition as shown by the pictures below! All items we sell are from a smoke-free/mold-free home/workplace and are in excellent condition unless otherwise noted. I own every work pictured for sale and I stand behind every item. Please follow/bookmark me as a favorite and keep checking back for more items for sale in the coming weeks.

For now, please check out my other Animation Drawings and Cels and other original modern and contemporary artwork for sale! The item "1946 RARE DISNEY WILLIE THE WHALE ORIGINAL PRODUCTION ANIMATION DRAWING CEL" is in sale since Tuesday, October 30, 2018. This item is in the category "Collectibles\Animation Art & Characters\Animation Art\Production Art".