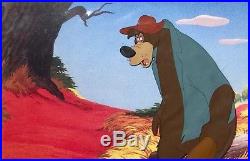 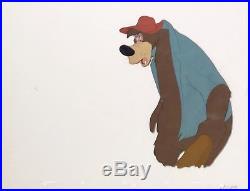 I'm gonna knock his head clean off. "Song of the South" from 1946 is a live-action/animated musical film produced by Walt Disney and released by RKO Radio Pictures.

Georgia has done a great many things for the Union, but she has never done more than when she gave Mr. Joel Chandler Harris to American literature. "Song of the South" was Disney's first feature film using live actors, who provided a framework for several animated segments throughout the film. The character of Uncle Remus, who was presumably a former slave, was played by James Baskett.

The film includes several folk tales of the adventures of anthropomorphic Br'er Rabbit and his enemies, Br'er Fox and Br'er Bear. The film's song "Zip-a-Dee-Doo-Dah" won the 1947 Academy Award for Best Song, is used often by both Disney and in popular culture. The film inspired the Disney theme park water log attraction, Splash Mountain.

Because of the film's depiction of black former slaves and of race relations in Reconstruction-Era Georgia; the film has been controversial since its original release. A number of critics, both at the time of its release and in later decades, have described the film as racist. Consequently, "Song of the South" has never been released in its entirety on home video in the United States. Br'er Bear is slow-witted (compared to Br'er Fox and Br'er Rabbit) and prone to violence when provoked.

He may be one of the most cruel and heatless of all the Disney villains. And, in referring to Br'er Rabbit, his most memorable quote is I'm just gonna knock his head clean off! Br'er Bear was animated by Marc Davis, Ollie Johnston, and Eric Larson and was voiced by Nicodemus (Nick) Stewart, who was an American television and film actor. Stewart was best known for his role as Lightnin' (Willie Jefferson) on the "Amos and Andy" television show. Measurements: Size - Br'er Bear: 7 x 5 1/2", Image 8 x 11 3/4".

Please follow/bookmark me as a favorite and keep checking back for more items for sale in the coming weeks. For now, please check out my other Drawings and Cels and other original modern and contemporary artwork for sale! The item "1946 RARE DISNEY SONG OF THE SOUTH BRER BEAR ORIGINAL PRODUCTION ANIMATION CEL" is in sale since Tuesday, February 20, 2018.