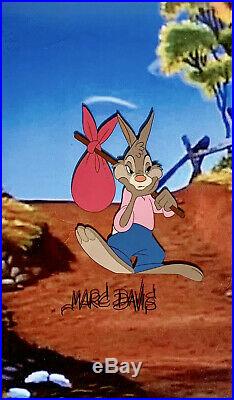 BR'ER RABBIT PRODUCTION CEL WALT DISNEY STUDIOS GOUACHE ON CEL, 1946. Original hand painted and hand inked production animation cel of Br'er Rabbit from "Song of the South, " 1946, Walt Disney Studios; Signed by Marc Davis in ink lower center; Set on a lithographic background; Unframed. "Song of the South" from 1946 is a live-action/animated musical film produced by Walt Disney and released by RKO Radio Pictures. It was based on the Uncle Remus stories collected by Joel Chandler Harris.

Harris created the character of Uncle Remus in 1876 and began writing the Uncle Remus stories as a serial series to, in his words, preserve in permanent shape those curious mementoes of a period that will no doubt be sadly misrepresented by historians of the future. " President Teddy Roosevelt said of Harris, "Presidents may come and presidents may go, but Uncle Remus stays put. Georgia has done a great many things for the Union, but she has never done more than when she gave Mr. Joel Chandler Harris to American literature. "Song of the South" was Disney's first feature film using live actors, who provided a framework for several animated segments throughout the film.

The film inspired the Disney theme park water log attraction, Splash Mountain. Because of the film's depiction of black former slaves and of race relations in Reconstruction-Era Georgia; the film has been controversial since its original release. A number of critics, both at the time of its release and in later decades, have described the film as racist. Consequently, "Song of the South" has never been released in its entirety on home video in the United States. Br'er Rabbit was animated by the great Walt Disney animators Marc Davis and Ollie Johnston.

Johnny Lee (an African-American singer, dancer and actor) provided the voice of Br'er Rabbit and James Baskett was the star of the film portraying Uncle Remus. In recognition of his warm portrayal of the famous black storyteller, Baskett was given an Honorary Academy Award; making him the very first black male performer to receive an Oscar. Measurements: Size - Br'er Rabbit: 4 x 3 1/4", Image 9 1/2 x 5". Condition: See pictures of the actual cel which is in excellent overall condition, as shown above! All items we sell are from a smoke-free/mold-free home/workplace and are in excellent condition unless otherwise noted.

I own every work pictured for sale and I stand behind every item. Please follow/bookmark me as a favorite and keep checking back for more items for sale in the coming weeks. For now, please check out my other Drawings and Cels and other original modern and contemporary artwork for sale! The item "1946 DISNEY SONG OF THE SOUTH RABBIT SIGNED ORIGINAL PRODUCTION ANIMATION CEL" is in sale since Tuesday, July 9, 2019.