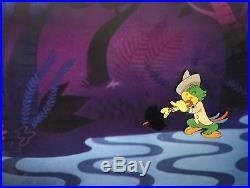 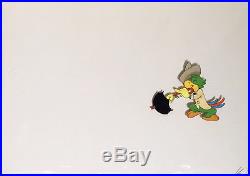 JOSE CARIOCA PRODUCTION CEL WALT DISNEY STUDIOS GOUACHE ON CEL, 1944. Original hand painted and hand inked production animation cel of José Carioca from "The Three Caballeros, " 1944; Walt Disney Studios; Set on a lithographic background; Numbered 61 in ink lower right; Unframed. "The Three Caballeros, " 1944 is an animated musical film produced by Walt Disney Productions which premiered in Mexico City on December 21, 1944, in the United States on February 3, 1945, and in the United Kingdom in March. The film focuses on a fantastic adventure which occurs through Latin America and is combination of both live-action and animation. The film stars Donald Duck, who is joined by his old friend José Carioca, the cigar-smoking parrot from "Saludos Amigos, " 1942 (representing Brazil); and later becomes friends with the pistol-packing rooster, Panchito Pistoles (representing Mexico).

The film is laid out as a series of individual segments that are connected by Donald Duck opening birthday gifts from his Latin American friends. Several Latin American stars appear in the film including; singers Aurora Miranda (sister of Carmen Miranda) and Dora Luz, and the singer and dancer Carmen Molina. José Carioca is a green Brazilian tropical parrot from Rio de Janeiro.

His design is based on a parrot that Walt Disney spotted during his trip to Brazil. José is suave, cool, fun, and a ladies man.

He was animated by Vladimir Tytla, Ward Kimball, Ollie Johnston, and Fred Moore. He was voiced by the Brazilian actor José Oliveira. This is a wonderful original production animation cel of José Carioca.

He is full figure, wearing a sombrero, and using his umbrella like a musical instrument. A fun and fancy free image of the famous parrot, and a great addition to any animation art collection! Measurements: Size - José Carioca: 3 1/2 x 4 1/4", Image 9 1/2 x 12 3/4".

I own every work pictured for sale and I stand behind every item. Please follow/bookmark me as a favorite and keep checking back for more items for sale in the coming weeks. For now, please check out my other Drawings and Cels and other original modern and contemporary artwork for sale! The item "1944 RARE DISNEY THREE CABALLEROS JOSE CARIOCA ORIGINAL PRODUCTION ANIMATION CEL" is in sale since Wednesday, July 18, 2018. This item is in the category "Collectibles\Animation Art & Characters\Animation Art\Production Art". The seller is "shadowline" and is located in Durham, North Carolina. This item can be shipped worldwide.