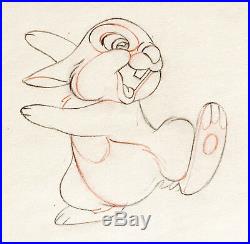 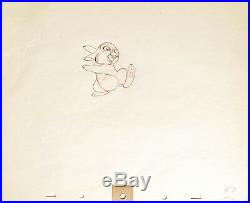 THUMPER PRODUCTION DRAWING WALT DISNEY STUDIOS RED AND GRAPHITE PENCILS ON PEG HOLE PAPER, 1942. Original production animation drawing in red and graphite pencils of Thumper from "Bambi, " 1942, Walt Disney Studios; Numbered 53 in pencil lower right; Unframed. Watch what I can do. Come on, it's all right. "Bambi, " 1942 is a full length animated film by Walt Disney Studios and based on the book "Bambi, A Life in the Woods" by Austrian author Felix Salten. The film was released by RKO Radio Pictures on August 13, 1942. "Bambi" received three Academy Award nominations: Best Sound (Sam Slyfield), Best Song (for "Love Is a Song" sung by Donald Novis), and Best Original Music Score. In June 2008, the American Film Institute presented a list of its "10 Top 10" (the best ten films in each of ten classic American film genres) and "Bambi" placed third in the animation category. In December 2011, "Bambi" was added to the National Film Registry of the Library of Congress. The story centers on Bambi, a white-tailed deer, his parents (the Great Prince of the forest and his unnamed mother), his animal friends Thumper (a pink-nosed rabbit), Flower (a skunk), and his childhood friend and future mate, a doe named Faline.

Walt Disney wanted all of the animals to be more realistic and expressive than those in "Snow White". He had Rico LeBrun, a wildlife animal painter, come into the Disney Studios to lecture to the animators on the structure and movement of animals. The animators went on excursions to the Los Angeles Zoo and Walt Disney set up a small zoo at the Disney Animation Studio with animals such as rabbits, ducks, owls, skunks, and a pair of fawns aptly named Bambi and Faline; so that the artists could see first-hand animal movement.

Animator Marc Davis created the final design of Bambi by incorporating LeBurn's realistic study of deer anatomy but exaggerating the character's face by making his proportions baby-like; including a short snout and big expressive eyes. "Bambi" was Walt Disney's favorite film he ever made, and it is not too surprising given his love of nature films.

The special effects, particularly the water, and the lush hand painted backgrounds create a wonderful environment that allows the viewer to be totally immersed into the film. Combined with a great story of friendship and complete success in the creation of characters; the film is able to provide amazing feelings of both happiness and sadness, as the viewer watches Bambi grows up from fawn to deer. Thumper (whose name is derived from his common habit of thumping his hind left foot), is Bambi's first and closest friend. He is a young, comical rabbit; and a well-known inhabitant of the forest who takes Bambi "under his wings" and teaches him the ways of the forest.

Thumper was voiced by 4-year-old Peter Behn. With Behn's voice added to the film; suddenly the vivacious bunny character was expanded from him having only minor role, to playing a much more significant lead. In addition, the film underwent a major plot change with the theme of friendship front and center. The character of Thumper was initially designed by animator Marc Davis and was brought to life by several animators including: Frank Thomas, Milt Kahl, Eric Larson, and Ollie Johnston.

Thumper was not only voiced by Peter Behn (young Thumper), but by Tim Davis (young adult Thumper) and Sam Edwards (adult Thumper). This is a wonderful original production animation drawing of Thumper from the very famous snow/ice scene. Bambi awakens to find his first snow covered forest.

The pond has frozen over, and his bunny friend Thumper assures him it's safe and he says, Hiya, Bambi. Thumper lifts his left back paw, races down the snow covered hill, and slides cross the ice covered pond. Bambi follows and slips and slides across the frozen pond. This is a great full figure, eyes and mouth open drawing of Thumper rendered in red and graphite pencils.

His paw is raised and he is ready to run down the snowy hillside. A beautiful and rare piece of vintage Walt Disney original production animation that is perfect for any art collection! Measurements: Size - Thumper: 2 3/4 x 2 1/2", Sheet: 10 x 12". Condition: See pictures below of the actual drawing, which is in excellent overall condition as shown by the pictures above! All items we sell are from a smoke-free/mold-free home/workplace and are in excellent condition unless otherwise noted.

I own every work pictured for sale and I stand behind every item. Please follow/bookmark me as a favorite and keep checking back for more items for sale in the coming weeks. For now, please check out my other Animation Drawings and Cels and other original modern and contemporary artwork for sale! The item "1942 RARE WALT DISNEY BAMBI THUMPER ORIGINAL PRODUCTION ANIMATION DRAWING CEL" is in sale since Wednesday, February 6, 2019. This item is in the category "Collectibles\Animation Art & Characters\Animation Art\Production Art".