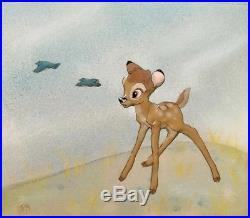 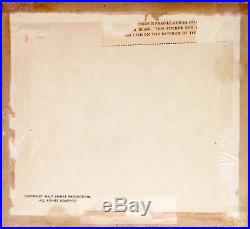 BAMBI & TWO BLUEBIRDS PRODUCTION CELS WALT DISNEY STUDIOS GOUACHE ON CEL, 1942. "Bambi, " 1942 is a full length animated film by Walt Disney Studios and based on the book "Bambi, A Life in the Woods" by Austrian author Felix Salten. The film was released by RKO Radio Pictures on August 13, 1942. "Bambi" received three Academy Award nominations: Best Sound (Sam Slyfield), Best Song (for "Love Is a Song" sung by Donald Novis), and Best Original Music Score. In June 2008, the American Film Institute presented a list of its "10 Top 10" (the best ten films in each of ten classic American film genres) and "Bambi" placed third in the animation category.

The special effects, particularly the water, and the lush hand painted backgrounds create a wonderful environment that allows the viewer to be totally immersed into the film. Combined with a great story of friendship and complete success in the creation of characters; the film is able to provide amazing feelings of both happiness and sadness, as the viewer watches Bambi grows up from fawn to deer. Although the character of Bambi was designed by Marc Davis; animation was accomplished by Frank Thomas, Milt Kahl, Eric Larson, Ollie Johnson, and Preston Blair. The voice of Bambi was provided by four different actors, corresponding to the different ages of Bambi as he grew older: Bobby Stewart (baby), Donnie Dunagan (young), Hardie Albright (adolescent), and John Sutherland (young adult).

Donnie Dunagan was also the performance model for the character, with the animators integrating his facial expressions onto the face of Bambi. This is a wonderful original production animation cel setup of an eyes and mouth open, full figure image of Bambi; together with a pair of flying bluebirds.

The cels have been placed on a Courvoisier air brush background. This is a beautiful piece of original animation artwork that is perfect for any collection! Measurements: Size - Bambi: 3 1/2 x 2 3/4", Image 6 1/4 x 7". Condition: See pictures below of the actual cels, which are in excellent overall condition as shown by the pictures below! All items we sell are from a smoke-free/mold-free home/workplace and are in excellent condition unless otherwise noted.

I own every work pictured for sale and I stand behind every item. Please follow/bookmark me as a favorite and keep checking back for more items for sale in the coming weeks. For now, please check out my other Animation Drawings and Cels and other original modern and contemporary artwork for sale! The item "1942 RARE DISNEY COURVOISIER BAMBI BLUEBIRDS ORIGINAL PRODUCTION ANIMATION CEL" is in sale since Saturday, June 9, 2018. This item is in the category "Collectibles\Animation Art & Characters\Animation Art\Production Art". The seller is "shadowline" and is located in Durham, North Carolina. This item can be shipped worldwide.