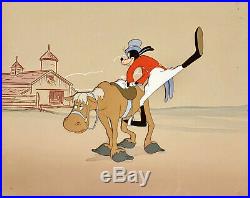 GOOFY & PERCY PRODUCTION CEL WALT DISNEY STUDIOS GOUACHE ON CEL, 1941. Original hand painted and hand inked production animation cel of Goofy and Percy from "How To Ride A Horse, " 1941, Walt Disney Studios; Set over a Courvoisier air brush background; WDP stamp lower right; Numbered A-117 in ink lower right; Unframed. "No truer has ever been uttered than those of Confucius, or some other philosopher, who said, "The outside of a horse is good for the inside of a man - Narrator. "How To Ride A Horse, " 1941 is an eight minute Goofy cartoon made by Walt Disney Productions and directed by Jack Kinney.

The short was originally released as a segment of "The Reluctant Dragon" on June 20, 1941; but was later released as a standalone cartoon on February 24, 1950. In 1938, one year after his last session as the character Goofy, Pinto Colvig (the original voice actor for Goofy) had a falling out with Walt Disney and quit the studio, leaving Goofy without a voice.

According to film critic Leonard Maltin, this event is what gave birth to the How To... Goofy cartoons of the 1940's; in which Goofy had little dialogue and a narrator (often John McLeish) was used as the primary voice of the shorts. As a stand in for limited Goofy dialogue, the Disney Studio would often reuse Colvig's voice taken from prior recordings or they hired George Johnson to imitate Colvig.

" shorts featured Goofy explaining, but always failing, how to do perform various activities; beginning with "How to Ride A Horse" in 1941 and continuing with "How to Hook Up Your Home Theater, in 2007. Colvig would return to Disney in 1940 and resumed the voice of Goofy three years later. The plot of "How To Ride A Horse" is that Goofy demonstrates the basics of how to ride a horse (named Percy); from selecting the proper clothes, mounting, the basic horse gaits, jumping, and returning the horse back to the stable. Pinto Colvig is the voice of Goofy, Clarence Nash the voice of Percy, and John McLeish is the narrator.

This is a rare original production animation cel of Goofy and his horse Percy from "How to Ride A Horse, " 1941. The cartoon's date placement is often incorrect in the list of How To... " Goofy shorts because of it's original release with the film "The Reluctant Dragon in 1941, compared to it's rerelease as a stand alone short in 1950. This fact makes "How to Ride A Horse" the first short of the famed How To...

This is wonderful image of Goofy attempting to mount his horse Percy and would be a great addition to any vintage Walt Disney animation art collection! Measurements: Size - Goofy & Percy: 6 x 6 1/4", Image 9 x 11 1/4". Condition: See pictures of the cel which is in excellent overall condition as shown by the pictures above! All items we sell are from a smoke-free/mold-free home/workplace and are in excellent condition unless otherwise noted.

For now, please check out my other Animation Drawings and Cels and other original modern and contemporary artwork for sale! The item "1941 DISNEY GOOFY HOW TO RIDE A HORSE ORIGINAL PRODUCTION ANIMATION DRAWING CEL" is in sale since Sunday, May 26, 2019. This item is in the category "Collectibles\Animation Art & Characters\Animation Art\Production Art".