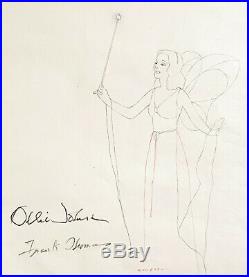 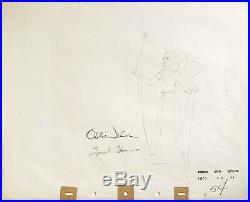 Pinocchio's journey to become a real boy is challenged by his encounters with an array of scrupulous characters. "Pinocchio" became the first animated feature to win an Academy Award; it won for both Best Music - Original Score and for Best Music - Original Song for When You Wish Upon A Star. " Most critics and audiences agree that "Pinocchio is among the finest Disney features ever made, and one of the greatest animated films of all time.

In 1994, it was added to the United States National Film Registry as being culturally, historically, or aesthetically significant. Due to the huge success of "Snow White, " Walt Disney wanted more famous voice actors for Pinocchio. Disney also wanted the character of Pinocchio to be voiced by a real child. The role ended up going to twelve year old actor Dickie Jones, who had previously been in Frank Capra's enormous Hollywood hit, Mr.

In a story meeting for the upcoming film "Pinocchio" on January 12, 1939, Walt Disney stated that the Blue Fairy was to give the appearance of loveliness... (but not look like) a glamour girl. The early model sheets and preliminary sketches reflect this idea, depicting the character as an ethereal beauty with swirling, billowing clothes and loose, unkempt hair (to reflect the fact that the fairy has literally flown into the scene). At some point in development, the design was changed to a less ethereal figure with human proportions. This final version of the character, with her glittery dress, solid hair, and more human proportions, suggested the inspiration of Jean Harlow (the American actress and sex symbol of the 1930's who was dubbed the "Blond Bombshell") and thus ultimately resembling the'glamour girl' Walt Disney had initially tried to avoid.

However, Disney seemed pleased with this version of the character, whose newly-found sexual allure worked on both Jiminy Cricket and the male animators working on the film, who reportedly whistled on first seeing a color test of the Blue Fairy. Jack Campbell's animation of the Blue Fairy closely followed live-action footage of Marge Champion (who was also the performance model for Snow White) under the direction of Hamilton Luske.

The Blue Fairy, was the only female character (besides Cleo the fish) in the film "Pinocchio" and was voiced by Evelyn Venable, an American actress. Evelyn was also the model for the first ever Columbia Pictures Torch Lady. Oskar Fischinger, a famous abstract filmmaker from Germany, who had been hired by Disney primarily to help with "Fantasia's" opening sequence of Toccata and Fugue in D Minor composed by Johann Sebastian Bach. The segment consisted of live-action of the orchestra playing the piece, illuminated by abstract light patterns set in time to the music and backed by stylized and superimposed shadows. Fischinger went on to be responsible for animation of the Blue Fairy's magic, including the effects surrounding her when she first enters Geppetto's workshop and the beams of light emanating from the Blue Fairy's wand.

This original production drawing is an absolute perfect image of the Blue Fairy. Her mouth and eyes are open, her pair of wings are visible as is her wand, and her flowing gown is delicately rendered beautifully. The drawing is hand signed by Frank Thomas and Ollie Johnston in pencil; and would be a great addition to any vintage Walt Disney animation art collection!

Measurements: Size - Blue Fairy: 8 1/2 x 4 3/4", Sheet: 12 1/2 x 15 1/2". Condition: See pictures of the actual drawing, which is in excellent overall condition despite minor tears on sheet edges and very minor paper loss to top and bottom edges as shown above! All items we sell are from a smoke-free/mold-free home/workplace and are in excellent condition unless otherwise noted. I own every work pictured for sale and I stand behind every item.

Please follow/bookmark me as a favorite and keep checking back for more items for sale in the coming weeks. For now, please check out my other Drawings and Cels and other original modern and contemporary artwork for sale! The item "1940 WALT DISNEY PINOCCHIO BLUE FAIRY ORIGINAL PRODUCTION ANIMATION DRAWING CEL" is in sale since Wednesday, July 10, 2019.