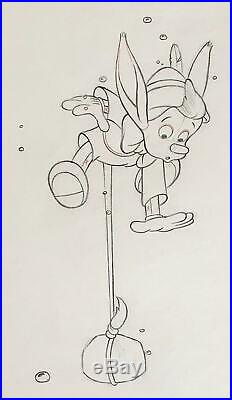 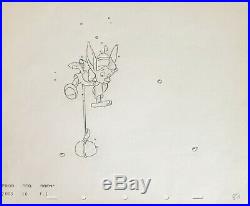 "Pinocchio, " 1940 was the second animated feature film produced by Disney, and followed on the success of Snow White and the Seven Dwarfs. It was released to theaters by RKO Radio Pictures on February 23, 1940 and was based on the Italian children's novel "The Adventures of Pinocchio" by Carlo Collodi. The general plot of the film involves an old wood-carver named Geppetto, who carves a wooden puppet that he names Pinocchio.

The role ended up going to twelve year old actor Dickie Jones, who had previously been in Frank Capra's enormous Hollywood hit, Mr. Animation began in September 1938 and just as in "Snow White, " live-action footage was shot for "Pinocchio" with the actors playing the scenes; which was supervised by Hamilton Luske.

The animators then used the footage as a guide for their animation drawings by studying the human movement and then incorporating many of those poses and scenes. The title character was animated by Milt Kahl (initial design), Frank Thomas, and Ollie Johnston.

"When I was doing Pinocchio, " Johnston said, I thought of the character being real, a living person, not a drawing. "Pinocchio, " was groundbreaking in the area of effects animation.

The animators gave realistic movement to vehicles, machinery, and natural elements; such as rain, lightning, snow, smoke, shadows, and water. In contrast to the character animators, effects animators create everything that moves around the characters. Sandy Strother, one of the Disney effects animators from "Pinocchio, " kept a diary about his year long animation of the water effects; which included splashes, ripples, bubbles, waves, and the illusion of being underwater.

All of this attention to detail contributed to "Pinocchio" being one of the first animated films to have highly realistic effects animation. Ollie Johnston remarked "I think that's one of the finest things the studio's ever done" and Frank Thomas stated, The water looks so real a person can drown in it, and they do. This is a wonderful full figure drawing of Pinocchio underwater. His eyes and mouth are open, he has his donkey ears and tail from his encounter at Pleasure Island, and he is surrounded by bubbles. In order to to weight him down, he has a rock tied to his donkey tail. This is large image of Pinocchio as he goes about searching for his father Geppetto, who was swallowed by the whale Monstro. A great vintage Walt Disney production drawing, perfect for any collection! Measurements: Size - Pinocchio with Rock: 5 1/2 x 2 1/2", Sheet: 10 x 12".

Condition: See pictures of the actual drawing, which is in excellent overall condition despite as shown above! All items we sell are from a smoke-free/mold-free home/workplace and are in excellent condition unless otherwise noted.

I own every work pictured for sale and I stand behind every item. Please follow/bookmark me as a favorite and keep checking back for more items for sale in the coming weeks. For now, please check out my other Drawings and Cels and other original modern and contemporary artwork for sale! The item "1940 RARE WALT DISNEY PINOCCHIO ORIGINAL PRODUCTION ANIMATION DRAWING CEL" is in sale since Friday, April 10, 2020.