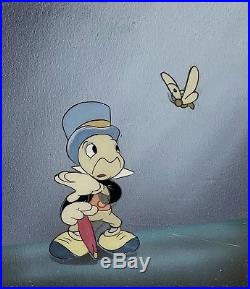 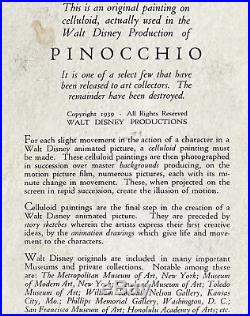 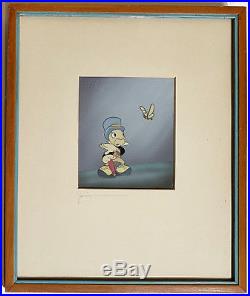 JIMINY CRICKET & BUTTERFLY PRODUCTION CELS WALT DISNEY STUDIOS GOUACHE ON CEL, 1940. Original hand painted and hand inked production animation cels of Jiminy Cricket and a Butterfly from "Pinocchio, " 1940, Walt Disney Studios; Set over a Courvoisier air brush background; With original Courvoisier Galleries label verso; Framed with original Courvoisier mat with Jiminy calligraphy title, wood frame, and glass. "Pinocchio, " 1940 was the second animated feature film produced by Disney, and followed on the success of Snow White and the Seven Dwarfs. It was released to theaters by RKO Radio Pictures on February 23, 1940 and was based on the Italian children's novel "The Adventures of Pinocchio" by Carlo Collodi.

" Most critics and audiences agree that "Pinocchio is among the finest Disney features ever made, and one of the greatest animated films of all time. In 1994, it was added to the United States National Film Registry as being culturally, historically, or aesthetically significant. Due to the huge success of "Snow White, " Walt Disney wanted more famous voice actors for Pinocchio. Disney also wanted the character of Pinocchio to be voiced by a real child. The role ended up going to twelve year old actor Dickie Jones, who had previously been in Frank Capra's enormous Hollywood hit, Mr. Animation began in September 1938 and just as in "Snow White, " live-action footage was shot for "Pinocchio" with the actors playing the scenes; which was supervised by Hamilton Luske. The animators then used the footage as a guide for their animation drawings by studying the human movement and then incorporating many of those poses and scenes.

The title character was animated by Milt Kahl (initial design), Frank Thomas, and Ollie Johnston. "When I was doing Pinocchio, " Johnston said, I thought of the character being real, a living person, not a drawing. Measurements: Size - Jiminy Cricket & Butterfly: 2 1/4 x 1 3/4", Image 3 1/2 x 3", Frame 9 x 7 1/2. Condition: See pictures below of the actual cels, which are in excellent overall condition as shown by the pictures below! All items we sell are from a smoke-free/mold-free home/workplace and are in excellent condition unless otherwise noted.

For now, please check out my other Drawings and Cels and other original modern and contemporary artwork for sale! The item "1940 RARE WALT DISNEY PINOCCHIO JIMINY CRICKET ORIGINAL PRODUCTION ANIMATION CEL" is in sale since Tuesday, January 1, 2019. This item is in the category "Collectibles\Animation Art & Characters\Animation Art\Production Art". The seller is "shadowline" and is located in Durham, North Carolina. This item can be shipped worldwide.