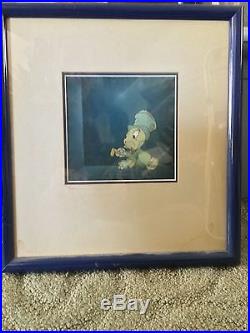 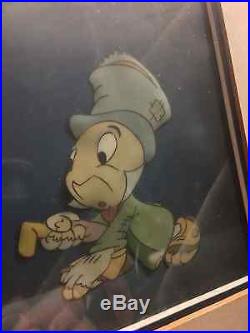 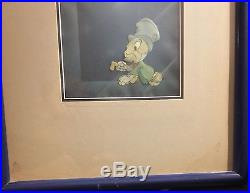 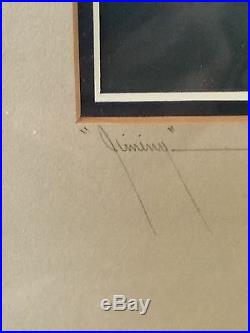 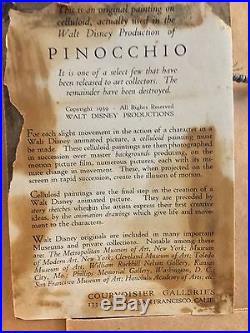 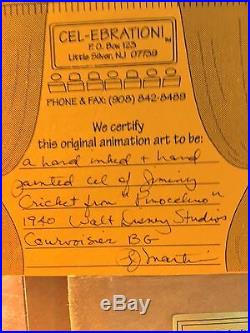 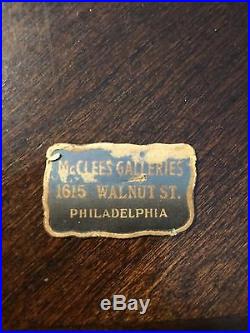 This c el is from a smoke-free/mold-free home and is in excellent condition. Overall: 12 H x 11 ¼. IOM: 4 ¾ H x 5 W. Image size: 2 ¾ H x 2 ¼ W. One (1) production celluloid, gouache on nitrocellulose, hand inked, trimmed to the ink line and mounted in register to a Courvoisier airbrushed background of a window. The cel and Courvoisier background are in excellent condition. Jiminy is written in script in lower left corner. There are 2 small stains on the bottom right and left corners on the original matting by the. A full color Certificate of Authenticity. Provided by Cel-Ebration of Little Silver NJ, 07739 by Pam Martin. Courvoisier Galleries 133 Geary St. San Francisco, Cal from the 1940 era. Pinocchio: What's a conscience?

Jiminy Cricket: What's a conscience! A conscience is that still small voice that people won't listen to.

That's just the trouble with the world today... "Pinocchio, " 1940 was the second animated feature film produced by Disney, and followed on the success of Snow White and the Seven Dwarfs. It was released to theaters by RKO Radio Pictures on February 23, 1940 and was based on the Italian children's novel "The Adventures of Pinocchio" by Carlo Collodi. The general plot of the film involves an old wood-carver named Geppetto, who carves a wooden puppet that he names Pinocchio. One night the puppet is brought to life by the Blue Fairy, who informs him that he can become a real boy if he proves himself to be "brave, truthful, and unselfish".

Animation began in September 1938. And just as in "Snow White, " live-action footage was shot for "Pinocchio" with the actors playing the scenes; which was supervised by Hamilton Luske. The animators then used the footage as a guide for their animation drawings by studying the human movement and then incorporating many of those poses and scenes.

The title character was animated by Milt Kahl (initial design), Frank Thomas, and Ollie Johnston. "When I was doing Pinocchio, " Johnston said, I thought of the character being real, a living person, not a drawing. Jiminy Cricket was animated by Ward Kimball, with Joe Grant working up early rough model sketches. Kimball would go on to work on many characters for the Walt Disney studios, including the Mad Hatter and Cheshire Cat in "Alice In Wonderland;" however the great Disney animators Frank Thomas and Ollie Johnston thought that Kimball's animation of Jiminy Cricket was the most sincere he ever did. From veteran Walt Disney animator Andreas Deja.

Ward Kimball surely was looking forward to animating Jiminy Cricket, after the bad experience he just had on Snow White. His brilliantly animated "Soup Eating Sequence" had been cut from the film, and now it was time for a fresh start on the next feature film Pinocchio. Even though Walt Disney personally assigned the Cricket to Kimball, the animator didn't seem to be able to please the boss with his initial designs. Not appealing, too grotesque and insect like! After many revised versions in which Ward de-insectified the design, Walt finally approved a design that though very appealing had very little to do with the anatomy of a real cricket. This is wonderful framed original production animation cel of Jiminy Cricket placed on an original airbrushed Courvoisier background, with the original Courvoisier Galleries label. Jiminy is in a ¾ pose facing left full figure, eyes and mouth open, dressed in rags, and he is wearing his top hat, and holding his umbrella. Just a perfect pose of one of the greatest Disney characters of all time! On to any animation collection. THERE IS NO PAINT MISSING ON THE CEL. ANY THAT MAY APPEAR ARE MEARLY FROM THE LIGHT REFLECTING OF THE PLEXIGLASS.

The item "1940 RARE WALT DISNEY PINOCCHIO JIMINY CRICKET ORIGINAL PRODUCTION ANIMATION CEL" is in sale since Monday, April 22, 2019. This item is in the category "Collectibles\Animation Art & Characters\Animation Art\Production Art". The seller is "footmd" and is located in Absecon, New Jersey. This item can be shipped to United States.