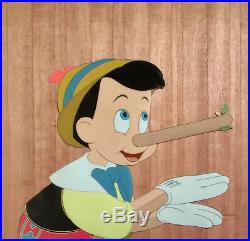 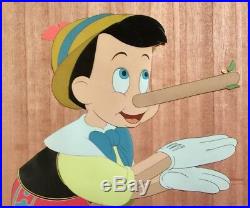 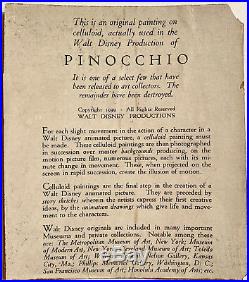 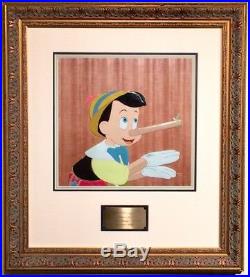 Pinocchio: They put him in a little sack. "Pinocchio, " 1940 was the second animated feature film produced by Disney, and followed on the success of Snow White and the Seven Dwarfs. It was released to theaters by RKO Radio Pictures on February 23, 1940 and was based on the Italian children's novel "The Adventures of Pinocchio" by Carlo Collodi. The general plot of the film involves an old wood-carver named Geppetto, who carves a wooden puppet that he names Pinocchio. One night the puppet is brought to life by the Blue Fairy, who informs him that he can become a real boy if he proves himself to be "brave, truthful, and unselfish".

Pinocchio's journey to become a real boy is challenged by his encounters with an array of scrupulous characters. "Pinocchio" became the first animated feature to win an Academy Award; it won for both Best Music - Original Score and for Best Music - Original Song for When You Wish Upon A Star. " Most critics and audiences agree that "Pinocchio is among the finest Disney features ever made, and one of the greatest animated films of all time. In 1994, it was added to the United States National Film Registry as being culturally, historically, or aesthetically significant. Due to the huge success of "Snow White, " Walt Disney wanted more famous voice actors for Pinocchio.

Disney also wanted the character of Pinocchio to be voiced by a real child. The role ended up going to twelve year old actor Dickie Jones, who had previously been in Frank Capra's enormous Hollywood hit, Mr. Animation began in September 1938 and just as in "Snow White, " live-action footage was shot for "Pinocchio" with the actors playing the scenes; which was supervised by Hamilton Luske. The animators then used the footage as a guide for their animation drawings by studying the human movement and then incorporating many of those poses and scenes. The title character was animated by Milt Kahl (initial design), Frank Thomas, and Ollie Johnston. "When I was doing Pinocchio, " Johnston said, I thought of the character being real, a living person, not a drawing. This is an extremely large original hand painted and hand inked production animation cel of Pinocchio set on a wood veneer Courvoisier background. The painted cel is an amazing 8 3/4 x 10 1/2, making it one of the largest portrait cels of Pinocchio to exist outside of Disney Archives! The cel is from one of the greatest scenes in the film, which occurs after Pinocchio has become Stromboli's star attraction as a marionette who is able to sing and dance without strings. Pinocchio wants to go home, but Stromboli locks him inside of a birdcage. Jiminy Cricket arrives to try and help him, but is unable to free Pinocchio from the cage. Suddenly the Blue Fairy appears, and asks Pinocchio why he is not in school. Although Jiminy urges Pinocchio to tell the truth, he starts telling lies; which causes his nose to grow longer and longer. This cel is from that famous scene when Pinocchio is telling the Blue Fairy that Jiminy was put into a little sack by two big monsters with green eyes. Pinocchio's nose grows longer, and now even has small leaves sprouting from the tip.

This is a wonderful cel from the most famous scene in the film, and would make a great addition to any serious animation art collection! The complete dialog for the scene is below. Blue Fairy: Pinocchio, why didn't you go to school? Pinocchio: I was going to school till I met somebody. Jiminy Cricket: Leave me out of this.

Measurements: Size - Pinocchio: 8 3/4 x 10 1/2", Image 12 x 12 1/2", Frame 25 x 22 1/2. Condition: See pictures below of the actual cel, which is in excellent overall condition as shown by the pictures below! All items we sell are from a smoke-free/mold-free home/workplace and are in excellent condition unless otherwise noted. I own every work pictured for sale and I stand behind every item. Please follow/bookmark me as a favorite and keep checking back for more items for sale in the coming weeks. For now, please check out my other Drawings and Cels and other original modern and contemporary artwork for sale! The item "1940 LARGE VERY RARE WALT DISNEY PINOCCHIO ORIGINAL PRODUCTION ANIMATION CEL" is in sale since Friday, December 7, 2018. This item is in the category "Collectibles\Animation Art & Characters\Animation Art\Production Art". The seller is "shadowline" and is located in Durham, North Carolina. This item can be shipped worldwide.