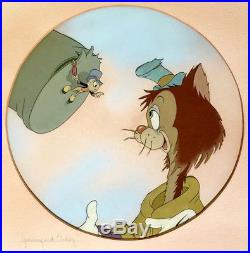 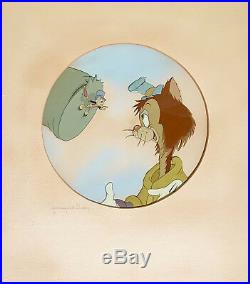 JIMINY CRICKET & GIDEON PRODUCTION CELS WALT DISNEY STUDIOS GOUACHE ON CEL, 1940. Original hand painted and hand inked production animation cels of Jiminy Cricket and Gideon from "Pinocchio, " 1940, Walt Disney Studios; Set over a Courvoisier air brush background; With partial original Courvoisier Galleries label verso; Matted with original Courvoisier calligraphy titled mat. What you doin' up there? "Pinocchio, " 1940 was the second animated feature film produced by Disney, and followed on the success of Snow White and the Seven Dwarfs. It was released to theaters by RKO Radio Pictures on February 23, 1940 and was based on the Italian children's novel "The Adventures of Pinocchio" by Carlo Collodi.

The general plot of the film involves an old wood-carver named Geppetto, who carves a wooden puppet that he names Pinocchio. One night the puppet is brought to life by the Blue Fairy, who informs him that he can become a real boy if he proves himself to be "brave, truthful, and unselfish". Pinocchio's journey to become a real boy is challenged by his encounters with an array of scrupulous characters. "Pinocchio" became the first animated feature to win an Academy Award; it won for both Best Music - Original Score and for Best Music - Original Song for When You Wish Upon A Star. " Most critics and audiences agree that "Pinocchio is among the finest Disney features ever made, and one of the greatest animated films of all time.

In 1994, it was added to the United States National Film Registry as being culturally, historically, or aesthetically significant. Due to the huge success of "Snow White, " Walt Disney wanted more famous voice actors for Pinocchio. Disney also wanted the character of Pinocchio to be voiced by a real child. The role ended up going to twelve year old actor Dickie Jones, who had previously been in Frank Capra's enormous Hollywood hit, Mr. Animation began in September 1938 and just as in "Snow White, " live-action footage was shot for "Pinocchio" with the actors playing the scenes; which was supervised by Hamilton Luske.

The animators then used the footage as a guide for their animation drawings by studying the human movement and then incorporating many of those poses and scenes. The title character was animated by Milt Kahl (initial design), Frank Thomas, and Ollie Johnston. "When I was doing Pinocchio, " Johnston said, I thought of the character being real, a living person, not a drawing. Jiminy Cricket was animated by Ward Kimball, with Joe Grant working up early rough model sketches. Kimball would go on to work on many characters for the Walt Disney studios, including the Mad Hatter and Cheshire Cat in "Alice In Wonderland;" however the great Disney animators Frank Thomas and Ollie Johnston thought that Kimball's animation of Jiminy Cricket was the most sincere he ever did. From veteran Walt Disney animator Andreas Deja. Ward Kimball surely was looking forward to animating Jiminy Cricket, after the bad experience he just had on Snow White. His brilliantly animated "Soup Eating Sequence" had been cut from the film, and now it was time for a fresh start on the next feature film Pinocchio. Even though Walt Disney personally assigned the Cricket to Kimball, the animator didn't seem to be able to please the boss with his initial designs. Not appealing, too grotesque and insect like!

After many revised versions in which Ward de-insectified the design, Walt finally approved a design that though very appealing had very little to do with the anatomy of a real cricket. Norm Ferguson (Fergy) was the animator responsible for bringing both J. Worthington Foulfellow (The Fox) and Gideon (The Cat) to life. Fergy is most remembered for his creation of Pluto, but his animation of both Foulfellow and Gideon was one of the true highlights of the film Pinocchio. The inspiration for Foulfellow (also called Honest John) was the classic vaudeville acts; with the actor's overdone dialogue and skill at improvisations.

Foulfellow was a very fast talking and persuasive Fox, who would not give poor Pinocchio time to think or respond before moving forward with his own plan to better himself, at the expense of his poor victim. Although dressed in a top hat, gloves, and a cape; all of his clothing is old, ragged, and with patches throughout. Walter Catlett provided the voice of Foulfellow and endowed the character with a wonderful sophisticated style, that added to the level of sophistication to this petty criminal. Catlett had started is own career in vaudeville and new how to impart that style into his reading of Honest John. In addition, Walter Catlett's voice was also great for Fergy's animation; as it allowed for facial expressions and for mannerisms that enhanced the feel of Honest John. This combination was perfect and really helped in the development of a much more brilliant character, and one of the most entertaining in the film. The inspiration for Gideon was the silent Marx Brother, Harpo. An earlier Walt Disney film "Snow White and the Seven Dwarfs, " had already proven that characters with no dialog ie. Dopy could become one of the the most memorable characters of the film. Gideon was going to be voiced by the legendary Mel Blanc, but Disney decided to delete all of his lines; preferring a mute Foulfellow sidekick who has only 3 hiccups in the entire film. This is a wonderful original production animation Courvoisier cel set-up of both Gideon and Jiminy Cricket. The cels are from the scene when Pinocchio had been persuaded by Honest John and Gideon not to go to school but rather to become a famous actor. Jiminy sees Pinocchio marching and singing with the wicked pair and races to catch up with them. Jiminy jumps onto Honest John's tail and then onto the top of his ragged green top hat. Pinocchio sees him and says Oh, it's Jiminy! As Honest John moves his head around trying to find what Pinocchio is seeing; the green top hat, with Jiminy holding onto with his umbrella, is tipped into the view of Gideon the Cat.

Condition: See pictures below of the actual cels, which are in excellent overall condition as shown by the pictures below! All items we sell are from a smoke-free/mold-free home/workplace and are in excellent condition unless otherwise noted. I own every work pictured for sale and I stand behind every item. Please follow/bookmark me as a favorite and keep checking back for more items for sale in the coming weeks.

For now, please check out my other Drawings and Cels and other original modern and contemporary artwork for sale! The item "1940 DISNEY PINOCCHIO JIMINY CRICKET GIDEON ORIGINAL PRODUCTION ANIMATION CEL" is in sale since Thursday, January 17, 2019. This item is in the category "Collectibles\Animation Art & Characters\Animation Art\Production Art".