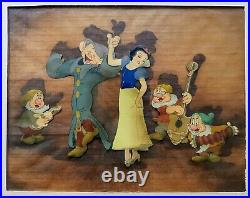 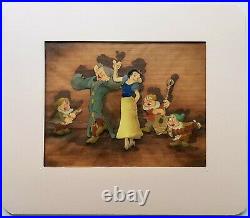 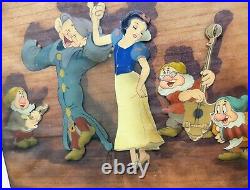 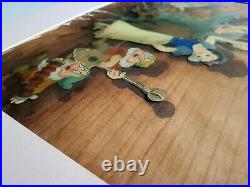 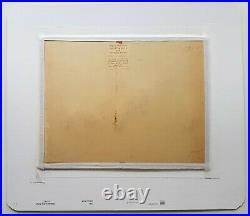 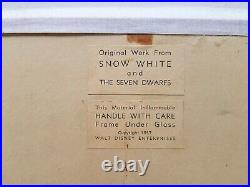 1937 SNOW WHITE & THE SEVEN DWARFS original production cel set-up. A fantastic original production cel capturing a classic dance scene from Snow White and the Seven Dwarfs; featuring Snow White and four of the dwarfs, it portrays the famous dance scene after dinner. Snow White is dancing with Dopey, Doc's playing the upright bass, Bashful is on the concertina, and Sneezy is strumming a mandolin. The cel has been trimmed and applied to a background as prepared by Courvoisier Galleries for sale.

The original Disney labels are affixed to the reverse. The image measures 12.5 x 7.5", with a mat opening of 13.25 x 10.25". The total size, including the mat, is 20 x 17.5 inches. In very good to fine condition. The piece is ready for framing; alternatively, it could be re-matted to the buyers taste. A wonderful, sought-after scene from the Disney classic, and a museum-worthy piece of animation history. The item "1937 Walt Disney's'SNOW WHITE & THE SEVEN DWARFS' original production cel setup" is in sale since Friday, May 28, 2021. This item is in the category "Collectibles\Disneyana\Vintage (Pre-1968)\Animation Art, Cels". The seller is "london_collectibles_limited" and is located in Chessington. This item can be shipped worldwide.