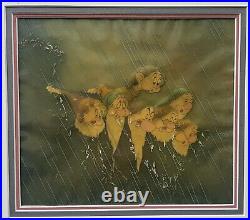 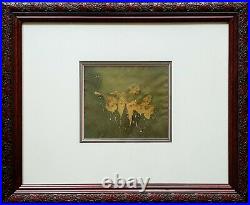 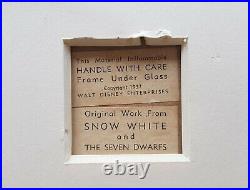 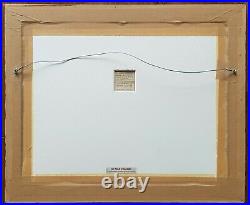 1937 Snow White and the Seven Dwarfs production cel. An original Walt Disney Production cel featuring all seven dwarfs over a Courvoisier background; the image captures the iconic scene when Bashful, Doc, Happy, Grumpy, Sleepy, Sneezy, and Dopey peer over the cliff edge in the pouring rain after the Queen's just fallen to her death. An incredible, museum worthy, piece of animation art from the Disney Studio's first feature-length animated film. The cel has an approximate image area of 8" x 7", and has been attractively framed and matted to an overall size of 23.5" x 19.5".

The cel's in VG-EX condition. The frame has a few spots of unobtrusive chipping/scuffing. This item is in the category "Collectables\Animation Art & Merchandise\Animation Art". The seller is "lcl2022" and is located in this country: GB.