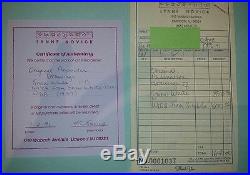 OLD HAG (THE WITCH) PRODUCTION DRAWING WALT DISNEY STUDIOS, 1937. Save and get the Snow White drawing I also have. I will discount both 10%!! Contact me with any questions. Original production drawing with graphite pencils of the Old Hag (The Witch) from "Snow White and the Seven Dwarfs, " 1937. The famed animator Joe Grant created the initial sketches of the Witch, which had some basis in the early Witch drawings from Arthur Rackham's illustrations from Hansel and Gretel. After Walt Disney approved the character design; Norman Ferguson was given the task of animating her. There were early concerns that the Witch would be viewed by the audience as more of a laughable and entertaining clown rather than an evil old hag; however, Norm's animation skill won out and the character seems even more menacing than her prior Queenly form.

The Witch is the only character in "Snow White" to look directly into the camera and therefore address the audience. With her one tooth, expressive eyes, and bony hands; Ferguson had a lot of choices in which to invoke fear and to scare.

Despite her slow movements and apparent frailness, we all know there is pure evil afoot! After the Evil Queen has transformed into the Old Hag, she magically creates the poisoned apple. With one bite of the poisoned apple, the victim's (Snow White's) eyes will close forever in the sleeping death. She places the apple into a basket and goes to the Dwarf cottage; and looking through a window, finds Snow White making pies.

This original production drawing is from the very beginning of this wonderful point in the film. This scene opens with the Hag's shadow appearing inside the cottage, covering Snow White. From the window sill , the Old Hag asks Snow White. The item "1937 RARE WALT DISNEY Snow White WITCH Original PRODUCTION DRAWING CEL Old Hag" is in sale since Tuesday, March 19, 2019. This item is in the category "Collectibles\Animation Art & Characters\Animation Art\Production Art".

The seller is "manda82792" and is located in Buffalo, New York. This item can be shipped to United States.