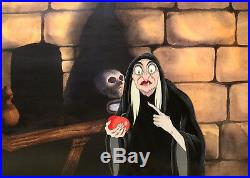 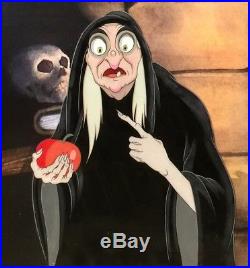 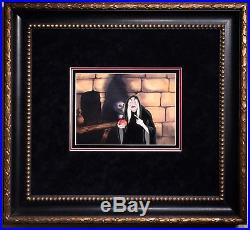 The film ran for five weeks in a row, the first motion picture to do so, and it could have played longer if not for prior commitments of the venue. It was to be the theatres' most successful engagement in all of the 1930s. The film was loved by everyone and Disney, along with his animation team, had managed to make an animated film that the audience would believe! The crowd would be sad and cry when Snow White bit the apple and was placed in a glass casket; and they would laugh, smile, and be happy during the song and dance numbers with the Dwarfs. However, Disney was criticized by some for making a very scary film for children.

When the movie was played at Radio City Music Hall on its first release, the theater managers had to replace the music played when Snow White runs into the Dark Forest; because they were nervous that the kids would be too frightened upon hearing it. Snow White's run into the Forest had another result; young children were still so scared by the sequence, that they wet their pants. As a result, the velvet upholstery of each and every seat held by a child, had to be replaced prior to every showing of the film. The Walt Disney film's version of the Evil Queen changing into an Old Hag is very different compared to the original story. In the Disney version, the Queen uses her dark magic powers to actually transform herself into an old woman instead of just taking on a disguise; as in the Brothers Grimm story.

Walt Disney's response to the idea that the film was too frightening for children was, I do not make films primarily for children. I make them for the child in all of us, whether we be six or sixty. This may have been his statement, but he never made another film with such a scary villain. Every film after Snow White had the main villain accompanied by a comedic sidekick; such as Maleficent and her Goons, Cruella de Vil with Horace and Jasper, or Medusa with Snoops. The famed animator Joe Grant created the initial sketches of the Witch, which had some basis in the early Witch drawings from Arthur Rackham's illustrations from Hansel and Gretel. After Walt Disney approved the character design; Norman Ferguson was given the task of animating her. There were early concerns that the Witch would be viewed by the audience as more of a laughable and entertaining clown rather than an evil old hag; however, Norm's animation skill won out and the character seems even more menacing than her prior Queenly form. The Witch is the only character in "Snow White" to look directly into the camera and therefore address the audience. With her one tooth, expressive eyes, and boney hands; Ferguson had a lot of choices in which to invoke fear and to scare. Despite her slow movements and apparent frailness, we all know there is pure evil afoot! The voice of the Queen was provided by Lucille Leverne and she also wanted to read for the part of the Witch. Leverne was a veteran stage actress and was perfect for the Queen, with a real regalness to her voice. When she was in the sound booth and Walt Disney heard her reading the role of the Witch, he stopped her and said that her voice just did not work for that role. Now her voice had changed to that wonderful raspy, gummy, and single toothed sounding Witch. Disney was amazed and asked how she had managed to get that perfect character voice, and Lucille replied, Oh, I just took out my false teeth. After the Evil Queen transforms herself into the Old Peddler Woman or Old Hag, she prepares the poisoned apple. The apple is created and pulled out of the Witch's cauldron and turns a bright red, To tempt Snow White to take a bite! " The Hag then realizes "But wait! There may be an antidote, " to the poisoned apple's "Sleeping Death spell.

This wonderful eyes wide open cel is from that pivotal scene. The Witch has her mouth open and you can see her single front tooth; and of course she is holding the poisoned red apple in her right hand! Cels of the Hag holding the apple are extremely rare, and represent the best example in animation for the character!

Condition: See pictures below of the actual cel, which is in excellent overall condition, as shown by the pictures below! All items we sell are from a smoke-free/mold-free home/workplace and are in excellent condition unless otherwise noted. I own every work pictured for sale and I stand behind every item. Please follow/bookmark me as a favorite and keep checking back for more items for sale in the coming weeks.

For now, please check out my other Drawings and Cels and other original modern and contemporary artwork for sale! The item "1937 RARE DISNEY SNOW WHITE SEVEN DWARFS HAG WITCH APPLE ORIGINAL PRODUCTION CEL" is in sale since Thursday, June 14, 2018.