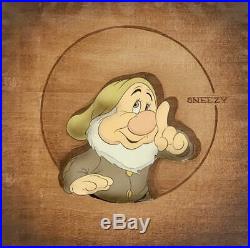 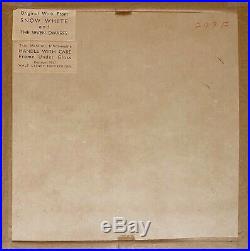 SNEEZY PRODUCTION CEL WALT DISNEY STUDIOS GOUACHE ON CEL, 1937. Original hand painted and hand inked production animation cel of Sneezy set on an airbrushed wood veneer Courvoisier background from "Snow White and the Seven Dwarfs, " 1937, Walt Disney Studios; Partial Courvoisier label verso; Unframed. Development on Snow White and the Seven Dwarfs began in early 1934, and by June Walt Disney announced to The New York Times the production of his first feature, to be released under Walt Disney Productions. Before Snow White and the Seven Dwarfs, the Disney studio had been primarily involved in the production of animated short subjects in the Mickey Mouse and Silly Symphonies series. Snow White and the Seven Dwarfs was to be the first full-length cel animated feature in motion picture history, and as such Walt Disney had to fight to get the film produced. Both his brother and business partner Roy Disney, as well as his wife Lillian attempted to talk him out of it. The Hollywood movie industry mockingly referred to the film, while is was in production, as Disney's Folly. Although the initial concept designing of the dwarfs was relatively easy for the Walt Disney animation department, the actual animating of them proved to be difficult. The animators, already finding human figures difficult to animate, now had to animate dwarfed human figures. The great Disney animator Vladimir Tytla noted that the dwarfs should walk with a swing to their hips, and Fred Moore commented that they had to move a little more quickly in order to keep up with the other human characters. Due to Sneezy's severe hayfever, he sneezes very often throughout the film and this often prevents him from speaking.

His sneezes can be gale force and will blow away anything and anyone in their path. As a result, the other dwarfs are quick to hold his nose whenever they feel he may have a sneeze approaching. The memorable scene in which the dwarfs tie a knot in Sneezy's beard was inspired by an early sketch by Albert Hurter, a concept and inspirational sketch artist at Walt Disney Studios. Various Disney artists were involved in the animation of Sneezy throughout the film including: Ward Kimball, Vladimir Tytl, Fred Moore, Shamus Culhane, and Les Clark. Billy Gilbert, an American comedian and actor known for his comic sneeze routines, provided the voice of Sneezy.

This is an absolutely wonderful original hand painted and hand inked production cel of Sneezy set on an airbrushed (used to create the shadow and the dwarf name) wood veneer Courvoisier background. The Courvoisier portrait series from Snow White is highly desired by collectors for their beauty. Courvoisier Galleries, the first to recognize the artistic value to the newly emerging animation art form, in the 1930s and 40s created the series to sell to the public. All the characters from the film were made for the series including The Seven Dwarfs, Snow White, The Huntsman, The Old Hag, and The Evil Queen. The character cels were trimmed and applied to the wood veneer background.

This is a wonderful eyes open portrait cel of a smiling Sneezy, as he holds his left finger up to his nose. A fantastic piece of vintage Walt Disney artwork, and would be a great addition to any animation art collection. Measurements: Size - Sneezy: 3 3/4 x 4", Image 7 1/2 x 7 1/2". Condition: See pictures of the actual cel, which is in excellent overall condition as shown above! All items we sell are from a smoke-free/mold-free home/workplace and are in excellent condition unless otherwise noted.

I own every work pictured for sale and I stand behind every item. Please follow/bookmark me as a favorite and keep checking back for more items for sale in the coming weeks. For now, please check out my other Animation Drawings and Cels and other original modern and contemporary artwork for sale! The item "1937 DISNEY SNOW WHITE SEVEN DWARFS SNEEZY COURVOISIER PRODUCTION ANIMATION CEL" is in sale since Friday, March 13, 2020. This item is in the category "Collectibles\Animation Art & Characters\Animation Art\Production Art". The seller is "shadowline" and is located in Durham, North Carolina. This item can be shipped worldwide.