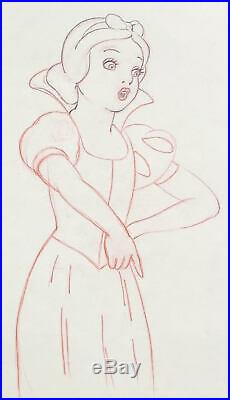 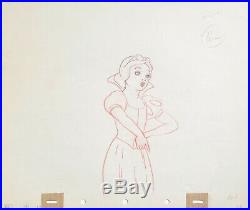 SNOW WHITE PRODUCTION DRAWING WALT DISNEY STUDIOS RED & GRAPHITE PENCILS ON PEG HOLE PAPER, 1937. Original production animation drawing of Snow White from "Snow White and the Seven Dwarfs, " 1937, Walt Disney Studios; Red and graphite pencils on peg hole paper; Numbered 62 in red pencil lower right; Production numbers stamp lower left; Unframed. Development on Snow White and the Seven Dwarfs began in early 1934, and by June Walt Disney announced to The New York Times the production of his first feature, to be released under Walt Disney Productions. Before Snow White and the Seven Dwarfs, the Disney studio had been primarily involved in the production of animated short subjects in the Mickey Mouse and Silly Symphonies series. Snow White and the Seven Dwarfs was to be the first full-length cel animated feature in motion picture history, and as such Walt Disney had to fight to get the film produced. Both his brother and business partner Roy Disney, as well as his wife Lillian attempted to talk him out of it. The Hollywood movie industry mockingly referred to the film, while is was in production, as Disney's Folly. Measurements: Size - Snow White: 6 3/4 x 3 1/2", Sheet 10 x 12". Condition: See pictures of the actual drawing which is in excellent overall condition as shown above! All items we sell are from a smoke-free/mold-free home/workplace and are in excellent condition unless otherwise noted. I own every work pictured for sale and I stand behind every item. Please follow/bookmark me as a favorite and keep checking back for more items for sale in the coming weeks. For now, please check out my other Animation Drawings and Cels and other original modern and contemporary artwork for sale! The item "1937 DISNEY SNOW WHITE SEVEN DWARFS ORIGINAL PRODUCTION ANIMATION DRAWING CEL" is in sale since Tuesday, August 18, 2020.