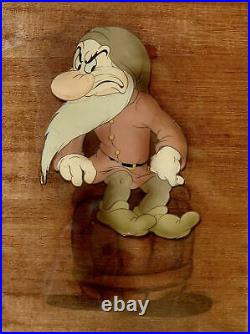 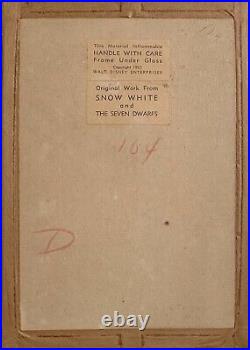 GRUMPY PRODUCTION CEL WALT DISNEY STUDIOS GOUACHE ON CEL, 1937. Original hand painted and hand inked production animation cel of Grumpy set on an airbrushed wood veneer Courvoisier background from "Snow White and the Seven Dwarfs, " 1937, Walt Disney Studios; Partial Courvoisier label verso; Unframed. I'd like to see anybody make me wash, if I didn't wanna. Development on Snow White and the Seven Dwarfs began in early 1934, and by June Walt Disney announced to The New York Times the production of his first feature, to be released under Walt Disney Productions.

Before Snow White and the Seven Dwarfs, the Disney studio had been primarily involved in the production of animated short subjects in the Mickey Mouse and Silly Symphonies series. Snow White and the Seven Dwarfs was to be the first full-length cel animated feature in motion picture history, and as such Walt Disney had to fight to get the film produced. Both his brother and business partner Roy Disney, as well as his wife Lillian attempted to talk him out of it. The Hollywood movie industry mockingly referred to the film, while is was in production, as Disney's Folly. Grumpy was animated by Vladimir "Bill" Tytla, who also animated Doc.

Tytla's Grumpy is the second most popular of the seven dwarfs, just behind Dopey. From Disney animator Andreas Deja. Tytla animated'from the inside out. For every scene he did, he lived inside of that character.

He drew absolutely beautifully, but bringing out emotion and personality came first. Even if that lead to an off model drawing here and there. Walt had Fred Moore take a look at a few of Tytla's Grumpy scenes in order to punch up the'charm level.

This is an absolutely wonderful original hand painted and hand inked production cel of Grumpy set on an airbrushed (used to create the barrel on which he is sitting) wood veneer Courvoisier background. Courvoisier Galleries, the first to recognize the artistic value to the newly emerging animation art form, in the 1930s and 40s offered original cels to sell to the public. This is a large full figure image of Grumpy with both eyes open and he is wearing his ever present frown. The cel is from the Bluddle-Uddle-Um-Dum (The Dwarfs' Washing Song) song sequence in the film. The song occurs after Snow White orders the Dwarfs to wash up for supper, and Doc leads the singing Dwarfs as they wash their face and hands.

Grumpy sits on a nearby barrel refusing to join in, and instead teases the other Dwarfs for taking orders from Snow White. Soon the Dwarfs grab him, throw him into the trough, and wash him; much to his anger. This is a fantastic and rare image of one of the most famous and popular character in the film, and a great addition to any animation art collection!

Measurements: Size - Grumpy: 4 1/2 x 3 1/2", Image 7 1/2 x 5 1/2". Condition: See pictures of the actual cel, which is in excellent overall condition despite very minor paint loss to the very tip of the beard as shown above! All items we sell are from a smoke-free/mold-free home/workplace and are in excellent condition unless otherwise noted. I own every work pictured for sale and I stand behind every item. Please follow/bookmark me as a favorite and keep checking back for more items for sale in the coming weeks.

For now, please check out my other Animation Drawings and Cels and other original modern and contemporary artwork for sale! The item "1937 DISNEY SNOW WHITE SEVEN DWARFS GRUMPY COURVOISIER PRODUCTION ANIMATION CEL" is in sale since Wednesday, December 30, 2020. This item is in the category "Collectibles\Animation Art & Characters\Animation Art\Production Art". The seller is "shadowline" and is located in Durham, North Carolina. This item can be shipped worldwide.