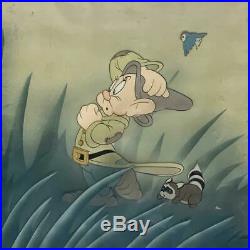 DOPEY, RACCOON, AND BLUE BIRD PRODUCTION CELS WALT DISNEY STUDIOS GOUACHE ON CEL, 1937. Original hand painted and hand inked production animation cels of Dopey, Raccoon, and a Blue Bird set on an airbrushed Courvoisier background with Grass overlay cel from "Snow White and the Seven Dwarfs, " 1937, Walt Disney Studios; Partial Courvoisier label verso; Unframed. Development on Snow White and the Seven Dwarfs began in early 1934, and by June Walt Disney announced to The New York Times the production of his first feature, to be released under Walt Disney Productions. Before Snow White and the Seven Dwarfs, the Disney studio had been primarily involved in the production of animated short subjects in the Mickey Mouse and Silly Symphonies series. Snow White and the Seven Dwarfs was to be the first full-length cel animated feature in motion picture history, and as such Walt Disney had to fight to get the film produced. Both his brother and business partner Roy Disney, as well as his wife Lillian attempted to talk him out of it. The Hollywood movie industry mockingly referred to the film, while is was in production, as Disney's Folly. Measurements: Size - Dopey: 4 1/4 x 3 1/2, Image 7 x 6 3/4. Condition: See pictures of the actual cels, which are in excellent overall condition as shown above! All items we sell are from a smoke-free/mold-free home/workplace and are in excellent condition unless otherwise noted.

For now, please check out my other Animation Drawings and Cels and other original modern and contemporary artwork for sale! The item "1937 DISNEY SNOW WHITE SEVEN DWARFS DOPEY COURVOISIER PRODUCTION ANIMATION CEL" is in sale since Wednesday, July 8, 2020. This item is in the category "Collectibles\Animation Art & Characters\Animation Art\Production Art". The seller is "shadowline" and is located in Durham, North Carolina. This item can be shipped worldwide.