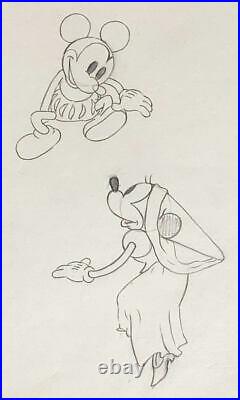 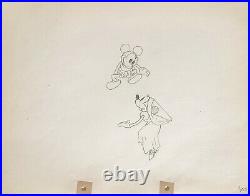 "Ye Olden Days" (released April 8, 1933) is a black and white Walt Disney Company animated short film directed by Bert Gillett and animated by Johnny Cannon, Les Clark, Art Babbitt, and Norm Ferguson. It stars Pinto Colvig as the voice of Dippy Dawg (later renamed Goofy), Walt Disney as the voice of Mickey Mouse, and Marcellite Garner as the voice of Minnie Mouse. The story of "Ye Olden Days" takes place in the middle ages. Mickey Mouse, the singing and lute playing wandering Minstrel, rides on his donkey and stumbles upon a castle. Inside the castle, the King is holding court, and Princess Minnie and Prince Dippy Dawg (later named Goofy) are about to marry. But Princess Minnie has second thoughts and ends up slapping the Prince. The King, angry over the incident, says to his Guards Lock her in the attic! Palace Guards lock Princess Minnie and her hand servant, Clarabelle Cow, in the attic.

Minnie and Clarabelle start to cry and are overheard by Mickey, who is outside the tower window. Mickey makes his way into the attic, through a window, and tells Minnie that he will save her. Mickey grabs Minnie and glides down a rope that was made from Clarabelle's clothing. As the pair make their way down the rope past a window, the King spots them and has them immediately arrested.

The King threatens to chop Mickey's head off, but Minnie begs her father for forgiveness; because she has fallen in love with Mickey. The King then announces, Clear the hall, we'll have a duel. The Prince shall battle this young fool! Mickey and the Prince prepare themselves and their faithful steads for the duel. The duel begins between Mickey and the Prince and, when they both fall off their animals, a duel erupts between Mickey's donkey and the Prince's horse. Mickey's donkey bites the horse's bottom making him whinny and bump into a wall. A portrait of the King falls onto the horse, rendering him unconscious. Minstrel Mickey eventually wins his duel with the Prince, who ends up falling out of a window. Then the Princess kisses her father the King, and goes off with Mickey.

Both Mickey and Minnie sit atop Mickey's donkey as the crowd carries them outside. The film ends as Mickey and Minnie share a kiss, shielded behind a hand held fan. This is an absolutely wonderful drawing of Mickey Mouse and Minnie Mouse from the black and white animated short "Ye Olden Days, " 1933. It is rare to have more than one character on a single sheet of animation paper, and this is a fantastic image. This drawing is from the end of the film, when Mickey is helping Princess Minnie up onto Mickey's donkey.

Both characters are full figure, eyes open, and they are looking at each other and smiling. A great and rare image from one of the early Walt Disney cartoon shorts.

Measurements: Size - Mickey and Minnie Mouse: 5 3/4 x 3 1/4", Sheet 9 1/2 x 12". Condition: See pictures of the drawing which is in excellent overall condition as shown by the pictures above! All items we sell are from a smoke-free/mold-free home/workplace and are in excellent condition unless otherwise noted. I own every work pictured for sale and I stand behind every item. Please follow/bookmark me as a favorite and keep checking back for more items for sale in the coming weeks.

For now, please check out my other Animation Drawings and Cels and other original modern and contemporary artwork for sale! The item "1933 RARE DISNEY MICKEY MINNIE MOUSE ORIGINAL PRODUCTION ANIMATION DRAWING CEL" is in sale since Saturday, January 2, 2021. This item is in the category "Collectibles\Animation Art & Characters\Animation Art\Production Art".