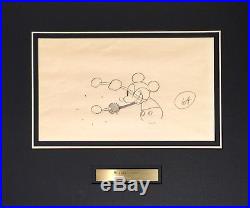 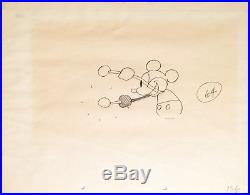 "Steamboat Willie" (released on November 18, 1928) is a black-and-white animated short film produced by Walt Disney Studios, released by Celebrity Productions, and was directed by Walt Disney and Ub Iwerks. The cartoon is considered the debut of Mickey Mouse and his girlfriend Minnie Mouse; although both characters had appeared several months early in a test screening of "Plane Crazy" and the earlier produced but not released short film The Gallopin' Gaucho. " Although "Steamboat Willie" was the third Mickey short to be produced, it was the first to be distributed because Walt Disney, having seen "The Jazz Singer, was determined to produce the first fully synchronized sound cartoon. With "Steamboat Willie" Disney achieved not only synchronized character sounds, but also a synchronized musical score.

Music for the short was arranged by Wilfred Jackson and Bert Lewis and included the songs "Steamboat Bill" and Turkey In the Straw. Walt Disney performed all of the voices for the film and it would go on to become the most popular cartoon of it's day. In 1994 "Steamboat Willie" was voted to be 13th in "The 50 Greatest Cartoons" of all time, and in 1998 it was selected for preservation in the United States National Film Registry for being deemed culturally, historically, or aesthetically significant.

The story of "Steamboat Willie" is that Mickey Mouse is piloting a river steamboat. He cheerfully whistles the song "Steamboat Bill" and he sounds the boat's three whistles. Mickey blows a raspberry at Pete and Pete attempts to kick Mickey, but kicks himself instead. Mickey rushes down the stairs but slips on a bar of soap on the boat's deck, and he lands in a bucket of water.

A parrots laughs at him, and in anger Mickey throws the bucket at him. Back on the deck, Pete pilots the steamboat and bites off some chewing tobacco and spits into the wind. The spit flies backward and rings the boat's bell. Pete tries to repeat this but the tobacco hits him in the face, causing him to get angry. Minnie Mouse almost misses boarding the boat, but manages to get on because Mickey is able to grab her by her underwear with the cargo crane, and swing her onto the deck just in the nick of time. Minnie accidentally drops her guitar and the sheet music to the song "Turkey In the Straw, " which was then eaten by a goat. Mickey and Minnie use the goat as a phonograph by winding his tail like a crank, and the song begins to to come out of the goat's mouth. Mickey uses various objects and the animals on the boat as percussion accompaniment. The end of the song is played by Mickey using a pair of mallets to hit the teeth of a mouth open cow, emulating a xylophone. Finally Pete is annoyed by all the racket and puts Mickey to work peeling potatoes.

In the potato bin, the same parrot as mentioned prior, laughs at him again; and an annoyed Mickey throws a potato at him, knocking him into the river. The short ends with Mickey laughing. The following two paragraphs are from a publication excerpt from The Museum of Modern Art, MoMA Highlights , New York: The Museum of Modern Art, revised 2004, originally published 1999, p. Disney's Steamboat Willie is a landmark in the history of animation. It was the first Mickey Mouse film released and the first cartoon with synchronized sound.

It threw silent animation into obsolescence, and launched an empire. Previously, there had been little to distinguish Disney's cartoons from those of his competitors. He was facing bankruptcy when Alan Crosland's The Jazz Singer , with long sequences of song and dialogue, took America by storm in 1927. Sensing that sound movies meant big business, Disney decided to stake all on his talking mouse.

The movie opened at the Colony Theater in New York on November 18, 1928, a date that would become known as Mickey's birthday. Audiences were stunned by the vitality of the film's characters.

Unhampered by the difficulties of using new equipment with live actors, Disney was able to fuse technology with handcraftsmanship, naturalism with abstraction, an ability that, over time, proved him to be a great artist. So strong was the audience demand for Steamboat Willie that two weeks after its premiere Disney re-released it at the largest theater in the world, the Roxy in New York City. Critics came to see in Mickey Mouse a blend of Charlie Chaplin in his championing of the underdog, Douglas Fairbanks in his rascally adventurous spirit, and Fred Astaire in his grace and freedom from gravity's laws. This is a spectacular drawing by Ub Iwerks of Mickey Mouse from the film that started it all, "Steamboat Willie, " 1928.

Mickey is eyes open and smiling while using a pair of mallets to play the teeth of cow like a xylophone, to the song Turkey In the Straw. " Walt Disney performed all of the voices for the film, and so no Disney art collection would be complete without an original piece of art from the first released Mickey Mouse cartoon "Steamboat Willie. Measurements: Size - Mickey Mouse: 3 x 4", Sheet 9 1/2 x 12", Mat 12 x 14 1/2. All items we sell are from a smoke-free/mold-free home/workplace and are in excellent condition unless otherwise noted. I own every work pictured for sale and I stand behind every item. Please follow/bookmark me as a favorite and keep checking back for more items for sale in the coming weeks. For now, please check out my other Animation Drawings and Cels and other original modern and contemporary artwork for sale! The item "1928 RARE DISNEY MICKEY MOUSE STEAMBOAT WILLIE ORIGINAL PRODUCTION DRAWING CEL" is in sale since Wednesday, October 31, 2018.