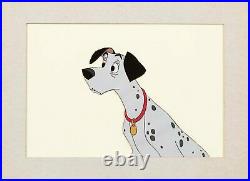 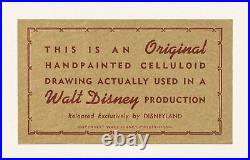 Pongo and Perdita Production Cels (2) Separate Art Corner Cels (Walt Disney, 1961). This was the first Disney feature to utilize Xerography to transfer animation drawings directly onto cels rather than hand-inking.

Is a pair of original hand-painted production cels of the stars of the film Pongo and Perdita. Both measure approximately 5" tall on trimmed cels in their original 12" x 9 Disneyland Art Corner mats with gold stickers on back. It's an excellent matching set of close-up images.

Pongo is in light gray while Perdita is slightly darker. One Hundred and One Dalmatians is a 1961 American animated produced by and based on the 1956 novel by. Directed by , , and , it was Disney's 17th. The film tells the story of a litter of puppies who are kidnapped by the villainous ("deVille"), who wants to use their fur to make into coats.

Their parents, Pongo and Perdita, set out to save their children from Cruella, in the process rescuing 84 additional puppies that were bought in pet shops, bringing the total of Dalmatians to 101. The film was originally released to theaters on January 25, 1961, by , and was a box office success, pulling the studio out of the financial slump caused by , a costlier production released two years from its box office revenue, its commercial success was due to the employment of inexpensive animation techniquessuch as using during the process of that kept production costs down. The item "101 Dalmatians Pongo Original Production Cels Disney 1961 Art Corner" is in sale since Monday, November 23, 2020.

This item is in the category "Collectibles\Animation Art & Characters\Animation Art\Production Art". The seller is "milyjam" and is located in Alpharetta, Georgia. This item can be shipped worldwide.